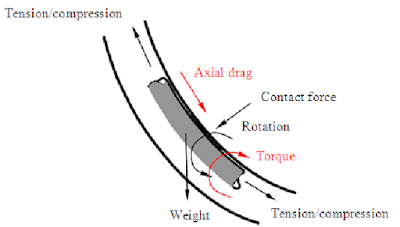 
Definition Of The Drill String Drag

Consider an object of weight W is resting on a horizontal plane.

In order to slide the object a force Ft must be exerted to overcome the force of friction Ff between the object and the plane surface.


The magnitude of the frictional force is

where,
Ff = frictional force, lb
µ = Friction Coefficient, dimensionless is  a constant that depends on the roughness of the object  and  plane  surface, Determined experimentally.
W = normal force acting perpendicular to the surface, lb

Therefore, the force Ft (Drag Force) required to slide the object should be slightly greater than Ff (friction Force)

2- The frictional or drag force Ff  is the normal force times the Friction Coefficient.

In a curved section of the wellbore where inclination  and  azimuth  change  across the section, the calculation of the drag force is more difficult. 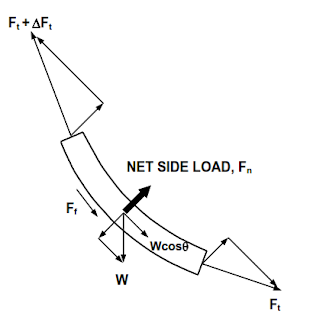 This drawing shows that the forces acting on a short slightly curved element of the Drill String.

1- The weight of the element

2- Normal forces  from  the  tension  forces  Ft   and Ft + delta Ft as a result of the change in the angle of inclination and the azimuth of the wellbore.

The magnitude of the resultant normal force can be estimated by an   equation presented Johancsik, Friesen and Dawson,

If the Drill String is moved up hole (or down hole) while being rotated as in back reaming,
the drag force is calculated by using the following equation, 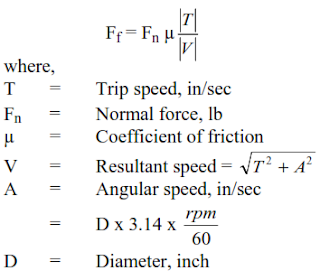 With the drill string at bottom, calculate:

The first step is to divide the drill string into small elements from bottom to top as shown in below Table. The drill collars are considered as one element since there is no change in inclination or azimuth across them. The drill pipe in the tangent section from 9600’ – 5600’ is also taken as one element for the same reason. The drill pipe in the curved section from 5600 to 5000 is divided into twelve 50-ft elements because the inclination and azimuth change across the curved section. The last element is the vertical section from 5000’ to surface. The entries in the columns are defined as follows: 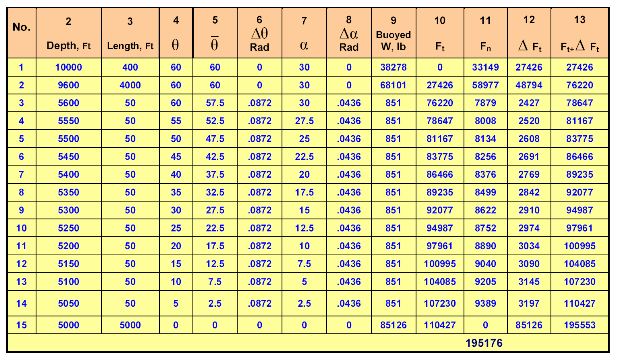 Column # 2: depth of the bottom of the element

Column # 4: angle of inclination in degrees at the bottom of the element

Column # 5: average angle of inclination across the element, or angle at bottom of
element plus angle at top of element divided by 2.

Column # 6: change in angle of inclination across the element in radians, or angle at
bottom of element minus angle at top of element. Multiply answer by
0.0174 to convert from degrees to radians.

Column # 7: azimuth at bottom of element in degrees.

Column # 8: change in azimuth in radians, or azimuth at bottom minus azimuth at
top multiplied by 0.0174.

Column # 9: buoyed weight of the element which is the weight in air times the
buoyancy factor. For drill pipe use the actual or adjusted weight per
foot.

Column # 10: tension force Ft at the bottom of the element. In this case since the drill string is off bottom Ft = 0 for element # 1. If the string is on bottom then Ft is a compressive force equal to the weight on bit.
Column # 11: normal force Fn calculated by using Eq (32)

Column # 12:
ΔFt calculated by below Eq.


Column # 1: Element #1 consists of the entire drill collars which lie across the tangent section.

Column # 4: Inclination at bottom of drill collars is 60 deg.

Column # 5: Average inclination is 60 deg because it is across tangent section, i.e. inclination at bottom of drill collars is same as at top.

Column # 7: Azimuth at bottom of drill collars is 30 deg.

Column # 8: Change in azimuth is zero because azimuths at top and bottom of drill
collars are the same.

Column # 10: The tension at the bottom of the drill collars is zero because the drill string is off bottom.

Column # 11: The normal force Fn is calculated by this Eq

at the bottom of element # 2

Column # 6: No change in inclination angle.

Column # 8: No change in azimuth, zero

Column # 11: The normal force is from above Eq

Column # 8: Change in azimuth is  Azimuth at lower end – Azimuth at upper end

Column # 10: Tension at bottom of element is equal to tension at top of previous element 76220 lb.

Calculations for elements 4 through 14 are done in the same manner.

Columns # 4 through 8: All values are zero because the pipe is vertical

Column # 13: Tension at the surface is

b) The total drag force is the sum of all drag forces generated by all elements, or
F μ (Total Drag Force)

The hook load is also equal to