What Is The Definition Of Roller Cone Drill Bit Journal Pin?

The Roller Cones Drill Bit journal pin is an integral part of the bit leg that provides the connecting point between the bit cone and the body. The pin is machined in a manner to accept the bearings and, in the case of the journal-bearing bit, is precision machined so it can serve as a metal-to-metal bearing. I other words The journal angle is formed between the axis of the journal and the horizontal. Since all three cones fit together, the journal angle specifies the outside contour of the bit.

The angle of the journal pin from the horizontal varies, depending on the type of the rock the bit is
designed to drill.  Hard-formation bits that are generally subjected to high bit weights have the pin oriented so it can accept the greater vertical component of the bit load. This concept is shown in Fig. 2 and Table 1.

The use of an Oversize Journal Angle increases the diameter of the cone and is most suitable for soft formation bits. Although this increases cone size, the gauge tip must be brought inwards to ensure the bit drills a gauge hole. 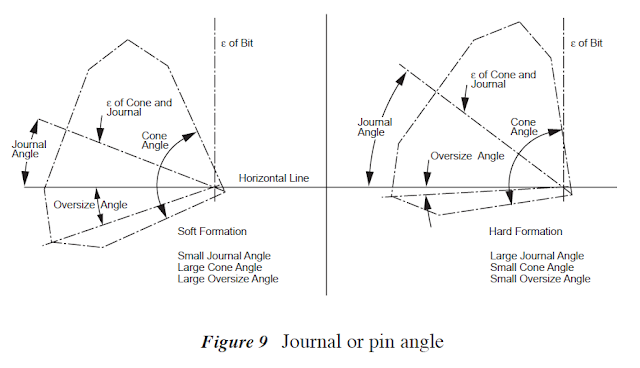 One important factor which affects journal angle is the degree of meshing or interfit (i.e. the distance that the crests of the teeth of one cone extend into the grooves of the other).


The effect of the amount of interfit due to journal angle on bit design:


In some formations, it is advantageous to design the cones, their configuration and journal angle so that they do not rotate evenly but that they slip during rotation. This Cone slippage, as it is called, allows a rock bit to drill using a scraping action, as well as the normal grinding or crushing action.

Another design feature of the bearing pin is the angle between the center line of the pin and the geometric center of the bit, as shown in Fig.4. The cone offset from the center of the bit causes the cone to drag across the formation and creates additional shearing actions, termed skew. As harder rocks are drilled, the degree of cone offset for the various types of bits decreases since compressive failure becomes the primary drilling mechanism instead of shearing. Too much skew will cause the bit to wear quickly in hard formations.

Again, The cones are mounted on bearings which run on pins that are an integral part of the bit body. The drilling action of a rolling cutter bit depends to some extent on the offset of the cones. As
shown in Fig.5 , the cone offset of the bit is a measure of how much the cones are moved so that their axes do not intersect at a common point in the center of the hole.

Offsetting causes the cones to slip as they rotate and scrape the hole bottom much like a drag bit. This action tends to increase penetration rate in soft formations. In hard formations where the rock must be fractured or broken, scraping contributes little to rock removal. In addition scraping against a hard formation is very abrasive and can wear the teeth down quickly. For these reasons hard formation bits are designed with little or no cone offset.

Basic cone geometry is directly affected by increases or decreases in either journal or offset angles, and a change in one of the two requires a compensating change in the other. Skidding-gouging improves penetration in soft and medium formations at the expense of increased insert or tooth wear. In abrasive formations, offset can reduce cutting structure service life to an impractical level. Bit designers thus limit the use of offset so that results just meet requirements for formation penetration.

Cone Slippage can be designed into the bit in two ways. Since cones have two profiles: the inner and the outer cone profile, a cone removed from the bit and placed on a horizontal surface can take up two positions. It may either roll about the heel cone or the nose cone. When the cone is mounted on a journal it is forced to rotate around the center of the bit. This “unnatural” turning motion forces the inner cone to scrape and the outer cone to gouge. Gouging and scraping help to break up the rock in a soft formation but are not so effective in harder formations, where teeth wear is excessive.

Cone slippage can also be attained by offsetting the axes of the cones. This is often used in soft formation bits. To achieve an offset the journals must be angled slightly away from the center. Hard formation bits have little or no offset to minimise slippage and rely on grinding and crushing action alone.