UNDER GAUGE HOLE IN DRILLING 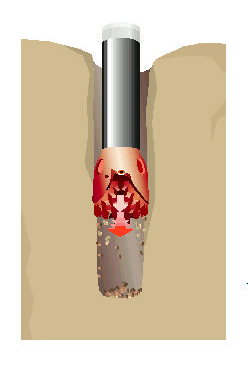 Under gauge hole may also be caused by a plastic formation. After being penetrated by the Drilling Bit with a fluid giving a hydro static pressure less than the overburden, which is the usual pressure of the plastic formation, this formation deforms causing the hole to close. One of the formations which most often causes such a situation is moving salt.

The only preventive measure is to use a drilling fluid dense enough to give overburden pressure at the depth of the salt. This will usually be impossible due to the risk of creating fractures elsewhere in the hole. In that case the drilling fluid density should be kept as high as feasible as the flow rate of the salt is proportional to the pressure difference. If the Drill String become Stuck the solution (!) is simple - a pill of fresh water. If this is done the effect of introducing a light fluid on well control aspects has to be taken into account. But here we will talk about the under gauge hole caused mechanically.

So we can summarize when the under gauge hole happens into simple points.

What Is The Indications For Under Gauge Stuck Pipe ?

How we could work on Freeing such mechanical stuck pipe type?