the purpose of the drilling bottom hole assembly BHA is to drill a useful vertical hole with full gauge, smooth bore and free of doglegs and ledges.
From the below drawing which shows the simplest bottom hole assembly (slick assembly) which consists of a bit and drill collars and no stabilizers, you will notice the following: 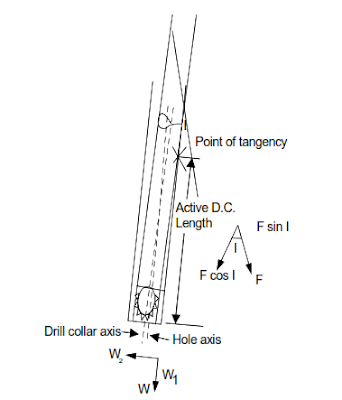 With no weight on the drilling bit, the only force acting on the bit is the force F which is the weight of the portion of the string between the bit and the point of contact.  This force can be resolved into two components:

The second force acting on the drilling BHA is the weight on bit W, which can be resolved into components
The force component W2 is responsible for hole deviation and its magnitude increases with increasing clearance between drill collars and hole and with increases in weight on bit. The magnitude and direction of the resultant hole deviation is dependent on the difference between W2 and F sin I.
The major source of natural hole deviation is formation characteristics. Laminated structures composed of alternating soft and hard bands can cause hole deviation. Practical experience has shown that laminated dipping formations cause hole deviation. When the dip angle is less than 45 degree, the drilling bit tends to drill up dip. When the dip angle is greater than 45 degree, the drilling bit tends to drill down dip.