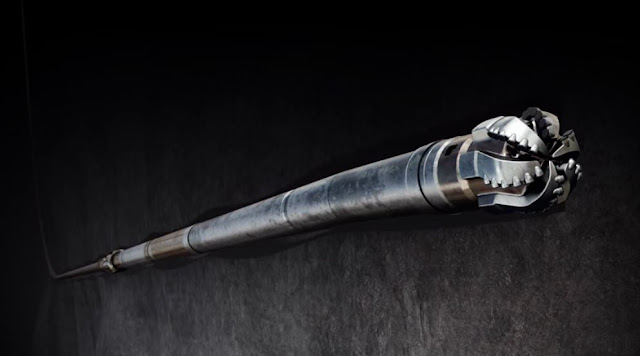 
The design approach in high inclination and horizontal wells differs from the approach in vertical wells in the following respects:


The objectives of drill string design in horizontal wells are:

Provide adequate weight on bit without buckling the drill pipe or heavy weight drill pipe.
Ensure that the components in the drilling assembly are not subjected to mechanical loads that exceeds their design limitation
Thus the problem is to determine where and at what bit weight the drill pipe will first begin to buckle. If this bit weight is sufficient to drill the well, buckling can be avoided by staying below it. If the bit weight needed causes the pipe to buckle, then heavy weight drill pipe should be run in the buckled sections.

As was mentioned before, the critical buckling load in a curved section is greater than that across tangent and vertical sections. Therefore, buckling of drill pipe will initiate in the tangent section (below the tangent point) or above the kickoff point.

The maximum weight on bit without buckling the drill pipe can be calculated in two steps: 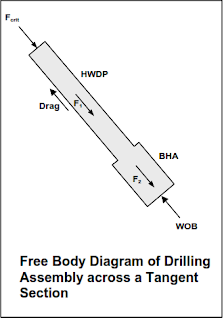 If the tangent angle of a curved or build section is less than horizontal, the highest mechanical compression in the drill pipe will occur in the joint at the top of the bottom hole assembly.


The force F1 is the effective weight of the HWDP and

The force F2 is the effective weight (along the hole axis) of the BHA. If the hole below the tangent point is horizontal, then cos 90=0 and


2) Calculate the maximum weight that can be applied on the bit without buckling the drill pipe above the kickoff point. 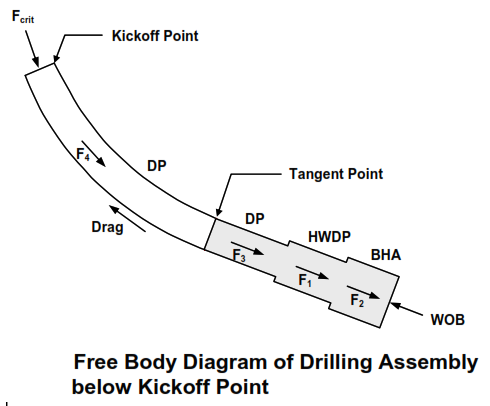 A free body diagram of the drilling assembly below the kick-off point . The forces in the diagram are defined as follows: 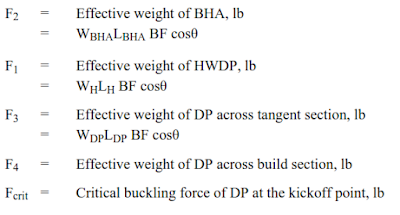 A simpler way of calculating the effective weight of the drill pipe across the build section is by using the following equation,

3) The lower of the two weights is the correct weight to be used for drilling. 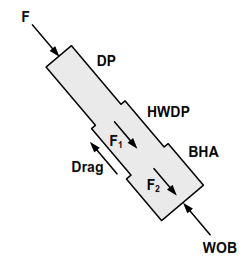 In drill string design of horizontal wells, the engineer may want to check if the applied WOB will buckle the drill pipe at the top of BHA.This is accomplished by drawing a free body diagram of the BHA showing only the mechanical forces as shown above. 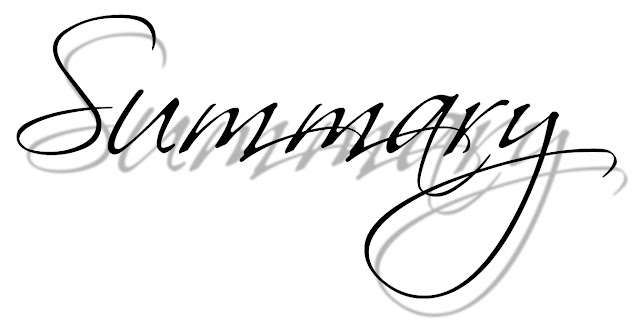