WHAT IS THE DRILL BIT TYPES IN OIL AND GAS FIELD 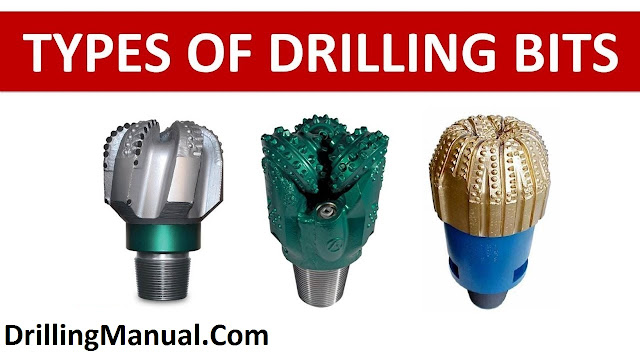 Rotary drilling bits have seen perhaps more technological advancements over the past years than any other type of drilling equipment. These advancements include such items as:
Each of these advancements represents a significant improvement over previous designs, and they tend to increase the effectiveness of the drilling process.

Rotary bits drill the formation using primarily two principles:
Broken rock is removed by rotary scraping or hydraulic cleaning. Either process can also contribute to the initial breakage. Most drilling operations can be divided accordingly into shear failure or compressive failure.

Shear failure involves the use of a bit tooth to shear, or cut, the rock into small pieces so it can be removed from the area below the bit. The simple action of forcing a tooth into the formation creates some shearing and results in cuttings development. In addition, if the tooth is dragged across the rock after its insertion, the effectiveness of the shearing action will increase (see Fig.1). Shear failure mechanism requires, however, that the formation exhibit a low compressive strength that will allow the insertion of the tooth.

To illustrate the type of shear failure used to drill softer formations, imagine that a knife blade is inserted into a piece of firm clay. As the blade is inserted, it creates small fragments of clay near the cutting surface. More fragments can be developed if the knife blade is twisted after it has penetrated the clay. This penetrating-twisting mechanism describes the principles involved in most soft-formation bits.

As the compressive strength or abrasiveness of the formation increases, the shearing-twisting action is reduced. Rocks with high compressive strengths generally prevent the insertion of a tooth that would have initiated the shearing action. In addition, rocks with a high abrasiveness quickly wear a bit tooth if it is twisted or dragged across the formation face. These types of rocks generally require that a compressive failure mechanism be used.

Compressive failure of a rock segment requires that a load be placed on the rock that will exceed the compressive strength of that given rock type. The oad must remain, or dwell, on the rock surface long enough for rock failure to occur (see Fig.2). Rock failure by compressive loading will not occur if the compressive strength of the rock exceeds the load or if the load is removed before it is transmitted from the bit tooth to the formation. This is the basis for the hard-rock drilling characteristics of high bit weights and low rotary speeds

Roller cone bits (or rock bits) are still the most common type of bit used world wide. The cutting action is provided by cones which have either steel teeth or tungsten carbide inserts. These cones rotate on the bottom of the hole and drill hole predominantly with a grinding and chipping action. Rock bits are classified as  milled tooth bits or insert bits depending on the cutting surface on the cones (Figure 2 and 3).

The first successful roller cone bit in oil field was designed by Hughes in 1909. This was a  major innovation, since it allowed rotary drilling to be extended to hard formations. The first design was a 2 cone bit which frequently balled up since the teeth on the  cones did not mesh. This led to the introduction of a superior design in the 1930s which had 3 cones with meshing teeth. The same basic design is still in use today although there have been many improvements over the years.

The cones of the 3 cone bit are mounted on bearing pins, or arm journals, which  extend from the bit body. The bearings allow each cone to turn about its own axis as the bit is rotated. The use of 3 cones allows an even distribution of weight, a balanced cutting structure and drills a better gauge hole than the 2 cone design.

The major advances in rock bit design since the introduction of the Hughes rock bit include:

These types of drill bits have steel teeth which are milled on the cones. The size and shape of teeth vary according to the formation to be drilled. In soft formation, the teeth are long and slender, where in hard formation the teeth are short and broad.

In these drill bit type, the teeth are not milled into the cones, instead of that, tungsten carbide inserts are pressed into the cones. These Technics make the bits much harder and can last longer when drilling through hard formation. The size and shape of teeth also depend on the formation to be drilled, the teeth can be long and chisel shapes in soft formation, and for hard formation can be short and round shapes.

Tungsten carbide is one of the hardest materials known. Its hardness makes it extremely useful as a cutting and abrasion-resisting material for roller-cone bits. The compressive strength of tungsten carbide is much greater than its tensile strength. It is thus a material whose usefulness is fully gained only when a design maximizes compressive loading while minimizing shear and tension. Tungsten carbide is the most popular material  for  drill-bit  cutting  elements.  Hard-facing  materials  containing  tungsten  carbide grains are the standard for protection against abrasive wear on bit surfaces.

The shape and grade of TCIs are influenced by their respective location on a  cone. Inner rows of inserts function differently from outer rows. Inner rows have relatively lower rotational velocities about both the cone and bit axes. As a result, they have a natural tendency to gouge and  scrape  rather  than  roll.  Inner  insert  rows  thus  generally  use  softer,  tougher  insert  grades that best withstand crushing, gouging, and scraping actions. Gauge inserts are commonly constructed of  harder,  more  wear-resistant  tungsten  carbide  grades  that  best  withstand  severe abrasive wear. It is thus seen that requirements at different bit locations dictate different insert solutions. A large variety of insert geometries, sizes, and grades through which bit performance can be optimized are available to the designer

Diamonds embedded in a matrix have been used since the early Chinese dynasties; however, modern usage for mineral exploration came into common use in the early 1900s. The diamond's natural wear resistance makes it competitive in today's drilling practices, even at their higher prices. Diamond bits
are used in conventional rotary, turbine, and coring operations.

Like any other product, diamond bit designs and applications must be understood to obtain optimum results at economical rates. The combination of fluid hydraulics blended with the selection and arrangement of diamonds enables this goal to be met in most formation types. .

Diamond bits are structured differently than roller cone bits (see Fig. 7-28). A matrix structure is embedded with diamonds and contains waterways from the bit throat to the exterior of the bit. The drilling fluid should flow across the face of the bit to clean the cuttings and cool the diamonds.

Rock failure mechanism with a diamond bit is slightly different than steel tooth or insert bits. The diamond is embedded in the formation and then dragged

The hardness and wear resistance of diamond made it an obvious material to be used for a drilling bit. The diamond bit is really a type of drag bit since it has no moving cones and operates as a single unit

The cutting action of a diamond bit is achieved by scraping away the rock. The diamonds are set in a specially designed pattern and bonded into a matrix material set on a steel body.

Despite its high wear resistance diamond is sensitive to shock and vibration and therefore great care must be taken when running a diamond bit.

The major disadvantage of diamond bits is their cost (sometimes 10 times more expensive than a similar sized rock bit). There is also no guarantee that these bits will achieve a higher ROP than a correctly selected roller cone bit in the same formation.

A new generation of bit technology began in 1973 when General Electric Co. introduced the Stratapax drill blank. This technology has been licensed to virtually all drill bit manufacturers who now produce their own proprietary PDC (polycrystalline diamond compact) bits. The names generally applied to these bits are PDC or Stratapax.

Drill blanks consist of a layer of polycrystalline, man-made diamond and cemented tungsten carbide produced as an integral blank by a high-temperature, high-pressure technique (Fig. 7-29). The resulting blank has nearly the hardness and greater abrasion resistance of natural diamond and is complemented by the strength and impact resistance of cemented tungsten carbide. Blanks are used as drag cutting elements attached to bits for drilling and mining applications (Fig. 7-30).

PDC Drill Bits Matrix & Steel:
PDC bits are designed and manufactured in two structurally dissimilar styles:
The two provide significantly different capabilities, and because both types have certain advantages, a choice between them would be decided by the needs of the application.

“Matrix”  is  a  very  hard,  rather  brittle  composite  material  comprising  tungsten  carbide grains metallurgically bonded with a  softer, tougher, metallic binder. Matrix is desirable as a bit material because its hardness is resistant to abrasion and erosion. It is capable of withstanding relatively  high  compressive  loads  but,  compared  with  steel,  has  low  resistance  to  impact loading. Matrix is relatively heterogeneous because it is a composite material. Because the size and placement  of  the  particles  of  tungsten  carbide  it  contains  vary  (by  both  design  and  circumstances), its physical properties are slightly less predictable than steel.
Steel is metallurgically opposite of matrix. It is capable of withstanding high impact loads but  is  relatively  soft  and  without  protective  features  would  quickly  fail  by  abrasion  and  erosion. Quality steels are essentially homogeneous with structural limits that rarely surprise their users.

A further development of the PDC drill bit concept was the introduction in the later 1980’s of Thermally Stable Polycrystalline (TSP) diamond bits. These bits are manufactured in a similar fashion to PDC bits but are tolerant of much higher temperatures than PDC bits.