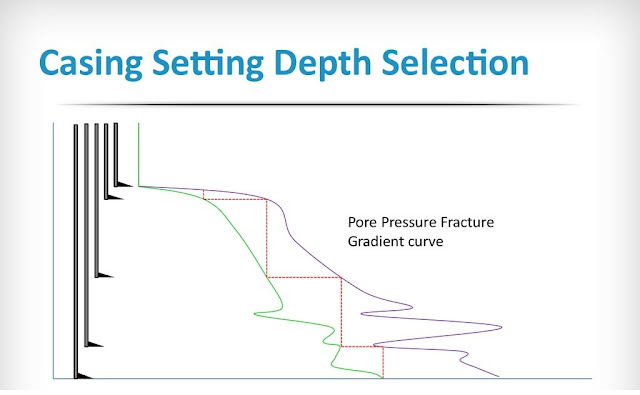 The selection of the number of casing strings and their respective setting depths generally is based on a consideration of the pore pressure and fracture pressure gradients of the formations to be penetrated.

The fracture gradient is defined as the bottom hole pressure required to keep the fracture open divided by the reservoir depth.

The fracture gradient can be estimated from the Eaton equation,

The pore pressure and fracture pressure gradients can be expressed in terms of equivalent mud density in pcf,

Solution:
The pressure gradient is pressure divided by depth, or,

The pore pressure and fracture pressure gradients expressed in equivalent mud density are plotted versus depth as shown below. 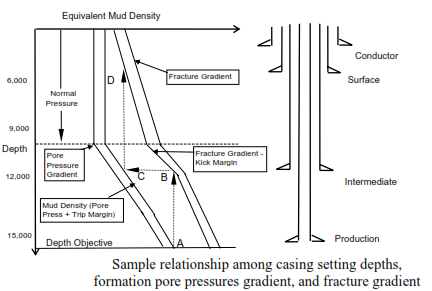 A line representing the planned mud density is also plotted. The planned mud density is chosen to provide trip safety margins above the anticipated formation pore pressure, to allow for reductions in effective mud weight created by upward drill pipe movement (swabbing) during tripping operations.
The safety margin allows for errors made in estimating the pore pressure.

A commonly used margin of error is 4 pcf or one that will provide 200-500 psi of excess (overbalance) mud hydrostatic bottom hole pressure over the formation pore pressure. Similarly, a 4 pcf kick margin is subtracted from the true fracture gradient line to obtain a design fracture gradient line. If no kick margin is provided, it is impossible to take a kick at the casing setting depth without causing a fracture and a possible underground blowout.

To reach the desired depth objective, the effective drilling fluid density shown at Point a is chosen to prevent the flow of formation fluid into the wellbore. To carry this drilling fluid density, without exceeding the fracture gradient of the weakest formation exposed within the wellbore, the protective intermediate casing string must be extended to at least a depth at Point b. This is, where the fracture gradient is equal to the mud density to drill to Point a.

Similarly, to drill to Point b and set intermediate casing, the drilling fluid density shown at Point c will be needed and will require surface casing to be set at least to the depth at Point d. If possible, a kick margin is subtracted from the true fracture gradient line to obtain a design fracture-gradient line. If no kick margin is provided, it is impossible to take a kick at the casing-setting depth without causing a fracture and a possible underground blowout.


Other Factors shall be considered

Other factors such as the protection of fresh ground water reservoirs, the presence of lost circulation zones, pressure depleted zones that tend to cause pipe sticking problems, and governmental regulations can also affect casing setting depths. Experience in some areas might determine where the best casing seat might be in order to get a good cement job.

The conductor is often driven into the ground with a big hammer, the resistance of the ground determines how much conductor is set. The casing driving operation is stopped when the number of blows per foot exceeds some specified number.

A well is to be drilled to a depth of 15,000’. Determine the number of casing strings needed to reach this depth objective safely, and select the casing setting depth of each string. Pore pressure and fracture gradient data are given below. Allow a 4pcf  trip margin, and a 4 pcf kick margin when making the casing seat selections. The minimum length of surface casing required to protect the freshwater aquifers is 2,000 ft. Approximately 180 ft. of casing is generally required to prevent washout on the outside of the conductor. 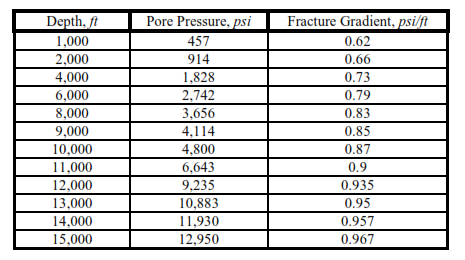 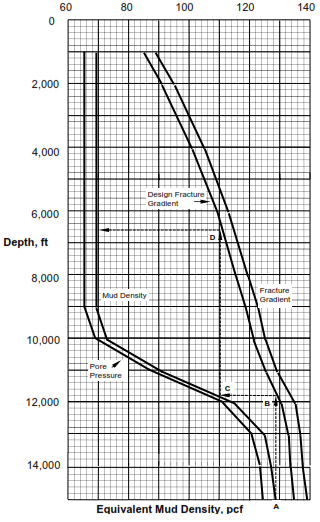 From the graph, You will find the following: