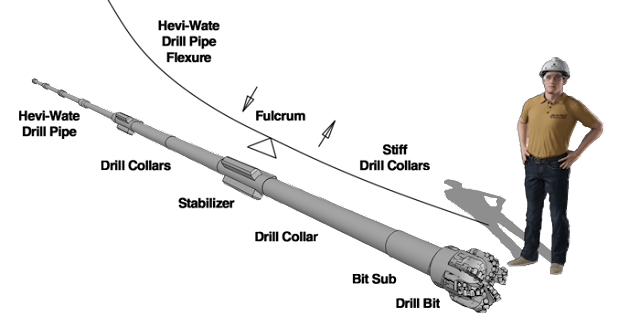 In general there are three types of Bottom Hole Assembly BHA: Slick, Pendulum and Packed BHA. 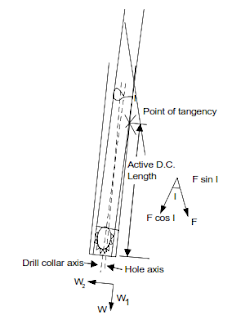 The slick BHA consists of a Drilling Bit and Drill Collars
without Stabilizer.

This BHA is suitable for formations which have mild crooked hole tendencies. Slick bottom hole assemblies are seldom used. 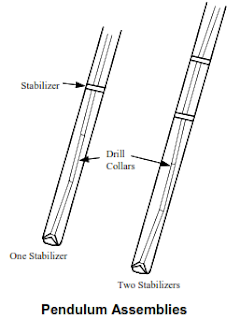 is used primarily to reduce or maintain hole deviation. The pendulum technique relies on the force of gravity to deflect the hole to vertical. The force of gravity, F sin I in the above figure, is related to the length of Drill Collars between the Drilling Bit and the point of tangency. The along-hole component of the force F is F cos I, which attempts to maintain the present hole direction. 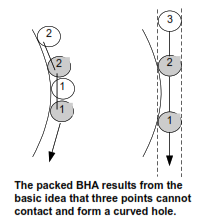 Relies on the principle that two points will contact and follow a sharp curve, while three points will follow a straight line as shown . A three-point stabilization is obtained by placing three or more Stabilizers in the portion of the hole immediately above the bit.

There are three different types of packed BHA:

This is used for formations which have mild crooked hole tendency that produce little or no deviation such as  hard and isotropic rocks. The three-point stabilization is provided at Zone-1, immediately above the Drilling Bit, at Zone 2, immediately above a short, large OD drill Drill Collar; and at Zone 3, on top of a standard length drill Drill Collar. If a vibration dampener (shock absorber) is  required, it should be placed at Zone-2 for maximum effectiveness. 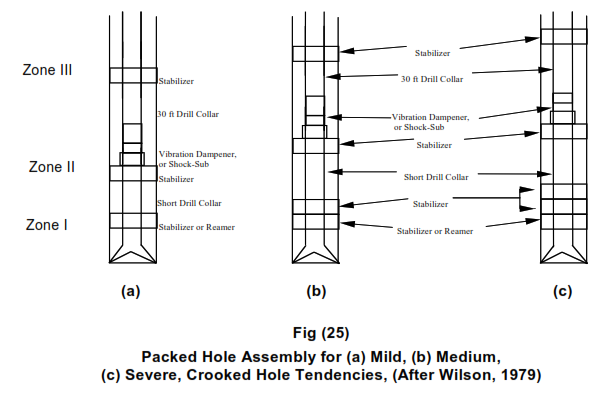 Drilling BHA Tendency is affected by the Forces Acting On Bottom Hole Assembly which will drive it into a certain direction. These Forces must be understood to be able to choose the most applicable Bottom Hole assembly BHA type.