Drilling mud are usually designed to be able to carry out its basic functions.Thus, As concentration of contaminants increases in a drilling fluid system as there will be detrimental effect on its performance. In general, we can define the contaminant as it is any material which causes undesirable changes in drilling fluid rheology and properties.

Solids are by far the most prevalent contaminants. Excessive solids, whether commercial or from the formation, lead to high rheological properties and slow the drilling rate. While there are specific treatments for each contaminant, it is not always possible to remove the contaminant from the system. Pretreatment can be advantageous as long as it is not excessive and does not adversely affect mud properties. The instability in the drilling mud properties is as a result of various contaminants incorporated in the mud system. Generally, a good drilling mud is simple and contains a minimum number of additives. This allows easier maintenance and control of properties even at elevated temperature and pressure. It is desirable to have a mud system that is flexible enough to allow changes to be made to meet changing requirements as they occur. Each change in mud should be planned well in advance of the time it is required.

From a mud viewpoint, drilling cement introduces two main contaminants. The major contaminant is calcium ion and the second contaminant which compounds the problem is hydroxide ions.

Invert muds are largely unaffected by the flocculating effects of increased calcium content, pH and solids increases. However green cement will reduce base fluid - water ratios and in turn emulsion stability. Whenever possible, drill out cement with seawater or expendable water base mud prior to displacing to invert muds.
Water Based Mud however can experience severe complications if precautions are not taken.
Freshwater systems with a high bentonite content or EZ-MUD systems are considered the most
sensitive to cement contamination. Generally, the rheological properties, filtration properties and
pH will show a dramatic increase as clay particals and polymers are flocculated by the calcium in
combination with the high pH. EZ-MUD systems will liberate NH3 as the PHPA breaks down.

There were an experiment was done on a small sample of mud and 50g, 100g &  150g of cement was added. Then mud tests was done after adding such volumes of cement. Below you can see the effect of the contamination on water base mud rheology . 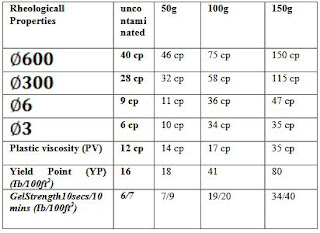 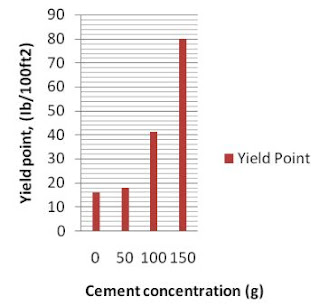 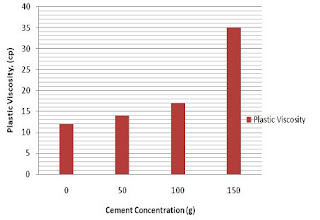 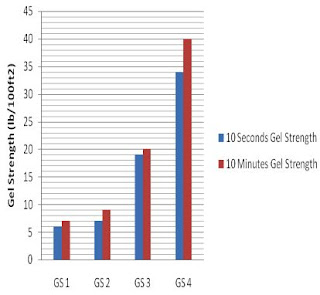 Precautions To Be Taken While Drilling Cement

Proper planning and pretreatment will serve to minimize problems associated with high flocculation, plugged flowlines and cement contaminated surface equipment. The following precautions should be made if it is planned to drill cement, particularly when there is a risk that the cement is green.

Under normal conditions, if the cement was displaced with a spacer and treated mud, the quantity of cement to be drilled will be manageable. A pretreatment with bicarbonate at 0.75 ppb (2.1 kg/m3) for 20” casing or 0.25-0.5 lb/bbl (0.70 - 1.50 kg/m3) for 13” or 9” casing will be sufficient. SAPP in very low concentration can also be used to effectively deflocculate the mud to reduce flocculation from the cement. Mud returns should be closely monitored to adjust further treatments with additional bicarbonate and water.

Conversion to a lime based system

A type of water-base mud that is saturated with lime, Ca(OH)2, and has excess, undissolved lime solids maintained in reserve. Lime muds are classified according to excess lime content:
All lime muds have pH in the range of 12, and the filtrate is saturated with lime. Fluid-loss additives include starch, HP-starch, carboxymethylcellulose (CMC) or polyanionic cellulose (PAC).

Prehydrated bentonite can improve the fluid loss and rheology of a lime mud. A maltodextrin in lime muds has been used as a clay deflocculant, a shale stabilizer and to increase calcium solubility. KCl in lime muds has been another innovation for successful drilling of hydratable shales. The ability to carry very high mud alkalinity (as excess lime) to neutralize acid gases is one reason lime muds are used. H2S zones can be drilled with more safety and copious amounts of CO2 can be neutralized by a large excess of lime.

Should it be necessary to convert to a lime based system, the conversion can be carried out while drilling cement. The first step is to reduce the solids and MBT below 17.5 lb/bbl (50 kg/m3) with heavy dilution, followed by a treatment of 2 ppb (5.7 kg/m3) caustic soda and 3 ppb (8.55 kg/m3) CARBONOX. The increased pH of the filtrate will suppress calcium solubility and retard the solidification of the fluid. During the breakover to a lime system, it is possible to experience a “viscosity hump”. Lime and caustic additions must be made to continue going over the hump. If the pH is allowed to drop, the conditions will become worse and the mud will remain viscous. A lime mud can be checked for a full breakover by adding more lime. If the fluid takes the lime without a viscosity increase, the mud is considered broken over.

When drilling cement with or without WBM, it is critical to be fully aware of the potential problems. It is prudent to pretreat and be prepared for the worst conditions than attempt to treat after the problem comes to surface. Nothing is certain when preparing to drill cement because of uncontrollable variables such as channeling of cement, varying hardnesses and varying degrees of interface. In many cases, economics will dictate the treatment. It may be more economical to discharge large quantities of contaminated mud and cement than to treat and risk contaminating / recirculating cement through the surface system. Many days have been lost cleaning cement from the bottom of mud pits. The key is preparation and planning for the worst case.