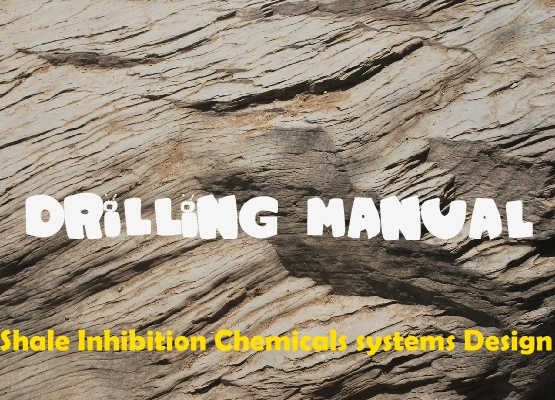 There are three approaches to stopping the clay formations /shale deteriorating upon contact with the drilling fluid /mud:
In the younger shales the main destabilizing mechanism is dispersion of the clay lattices by penetration of water into the interlattice zone. Limiting water penetration in these formations is difficult due to their rapid reaction rate. Using IOES is generally not economic due to the large volumes required and the potential for downhole losses. The main stabilizing mechanism is the use of inhibition chemicals.

The interlayer cations, which control the dispersion of clay lattices, are exchangeable. Many factors influence this reaction.

The replacing power of the common cations is Na+ lower than K+ lower than Ca++ lower than Mg++ lower than NH ++++. The exchange is stoichiometric and the laws of mass action hold. Increased concentration of the replacing cation results in greater exchange. The ease of release depends not only on the ion, but also upon the other ions filling the remainder of the exchange positions. Replaceability varies with the nature of the anions present in the solution; Ca++ in the hydroxyl form is more available for exchange than the sulphate variety. The pH dramatically affects the reaction. Fixation of the exchange cations varies with the size of ions of the same valence. For ions of equal valence, those that are the least hydrated have the greatest energy of replacement. K+ fits into the basal oxygen sheet and remains fixed. The internal clay structure also plays an important role.

With so many influencing factors, predicting the response of a particular shale is potentially unreliable. In exploration drilling the estimate will generally be reliant upon experience in surrounding areas. In development drilling, cores (albeit sidewall cores) are available and should be tested to determine the most effective solution. Recovered cuttings cannot be used as they will have already undergone some alteration.

Highly ionic solutions, particularly those with monovalent anions severely reduce the rate of water inhibition by smectite clays. The most common, and most economical, is chloride (Cl­); usually as common salt, NaCl. In offshore applications this is readily available (and free) from the sea water (20,000 mg/l).

Calcium drilling fluids are more difficult to run as most common additives adversely react with divalent ions; there are some tolerant materials available. High calcium systems, in conjunction with high temperatures and hydro­aluminium silicates (clays), can form a type of cement, rendering the drilling fluid / mud irretrievably solid.

Mg++ reacts similarly to Ca++ . However many more additives are adversely sensitive to Mg++.

A primary agent in the diagenesis of smectite to illite/muscovite. The process is normally slow (geological time) and requires high energy (pressure and heat). However in some cases (K++ deficient deposition environments) the reaction does progress fast enough to be beneficial. Commonly K+ is provided by KCl.

K+ activity can be negated by high concentrations of Na+. K+ varieties of common fluid additives, such as KOH and K2CO3, are available. When using sea water, ensure sufficient K+ concentration to exceed that of the Na+.

Once fashionable were Potassium­Lime/Gyp systems. It was theorised that first the Ca++ would convert the reactive Na+ smectite to the low reactive type and then the slower reacting K+ would then convert the smectite to sub­illite. Exchange chemistry indicates that this cannot happen.

KOH has been promoted as a stabiliser for reactive clays. However, the OH­ radical is the prime clay dispersive element; therefore this reaction is dubious.

Complexing of the phosphate anion with the exchangeable cations can preclude cation exchange and water imbibition. The most commonly employed forms are PO4- or P2O7-. Bit balling additives are phosphate surfactants. Most phosphates have a temperature limit of 65°C; though Na2HPO2 can be used up to ±200°C.

Periodically other chemicals are investigated or promoted. The reactions, and any side effects, should be thoroughly investigated before field testing. Evaluation should consider all potentially beneficial factors.

In the more competent shales the naturally low permeability resists ingress of water, within the time frame of drilling the section, and the shales are usually composed of the less reactive Illite. The main destabilizing mechanism is differential tectonic stress.

The drilling fluids / mud cannot permanently protect the formation against this deterioration. However it can mitigate the effect by providing a restraining differential pressure to hold the failed pieces in place. To maintain this protection until casing point the fluid must resist pressure equalization into the shale for that length of time.

Cuttings from these formations also need protection from the annular environment. They are subjected to considerable force and abrading action in their journey. Maintaining them at the largest possible size facilitates easier and earlier removal at the surface. This protection must be rapid as the cuttings are being attacked immediately they are released from the bottom of the hole.

Coating the exposed clay edges at the well bore wall with high molecular weight polymers to slow down or try and repel the water is not effective. Such materials are too large to effectively stop pressure transmission.

The limited successes reported in the field is attributed to a mechanical binding effect from these highly adsorptive materials or to other mechanisms in the system, such as increased pseudoplasticity.

Encapsulating polymers can provide sufficient protection to the cuttings to allow them to be transported to the surface. Application is limited to the shales that produce actual cuttings during drilling (medium to hard). The soft shales mechanically disintegrate too easily, and every small particle of shale will take up polymer. This consumes expensive material for no benefit in keeping the particles together.

PAC is a modified CMC. It is a relatively long chain polymer that is Poly Anionically charged.

PHPA is a synthetic long chain copolymer based upon acrylic acid. The side chains are highly anionic.

These materials are anionic asphaltene like substances. Application is limited to high temperature wells they can soften and bond to the borehole walls. Like encapsulating polymers, they do not stop pore pressure penetration. Their limited success in certain areas is attributed to a mechanical binding effect.

Outside of invert oil emulsion systems the only available material to effectively block the pore throats and stop pressure transmission are polyglycols.
These molecules are normally soluble in a drilling fluid / mud at surface conditions. When the temperature passes a critical point, the polyglycols change to an insoluble phase; this transition is called the cloud point. The resultant micro­gels are large enough to block the shale pore throats and stop pressure transmission.

The transition temperature can be regulated with the choice of polyglycol and salinity of the base water to match the cloud point with the formation temperature. The polymer then penetrates the pore throat, heats up, comes out of solution and blocks further penetration.

Having decided to use an inhibiting system, selection then proceeds to satisfy all the criteria to drill the well.

In addition to those already discussed other performance criteria are:
The drilling fluid / mud must also satisfy some common requirements, such as:

Each phase is analysed. The fluid properties are investigated to determine the performance levels required. Additives are compared against the models. The economics of the various products are then evaluated to select the optimum fluid for the well.

Upper hole sections where hole stability is from type 1 and 2 shales and uncemented formations.

Type 2, 3 and 4 shales. Additives in addition, or alternate to, those listed for the saltwater­polymer system:

Type 5 shales. Additives in addition, or alternate to, those listed for the salt­polymer system:
There are many individual variations depending upon the specific goals to be achieved, the conditions prevailing and the economics of the operation. The above are purely meant as typical guidelines.

The key to successfully drilling unstable ground is maintaining stable properties and composition.

In addition the system must be adaptable to variances from the original hypotheses. Unless permanently converted , any potentially troublesome formation will revert to being problematic if the stabilising mechanism is diluted or removed. Most fluid designs are based upon what will probably happen, some on what might happen, but very few upon what will happen. Thus the engineer must be aware of changes in the formation and its relation to the drilling fluid. If a change is observed or if the fluid is not inhibiting the formation sufficiently he must adjust the right parameters accordingly.

A key requirement for effective management of the inhibitive drilling fluid is single function additives. Individual properties can then be adjusted without interference to the other properties. This is essentially for maintaining overall efficiency.

The key to proper engineering of the inhibited fluid is being able to recognise the indicators of a problem.

The penetration rate can be an indicator of increased porosity in a shale section due to abnormal pressure.

The cuttings being screened at the shakers are a primary indicator of what is happening downhole.

Tight hole and excessive torque indicate that the hole is less than gauge. This can be due to swelling of water sensitive young clays or geopressured plastic formations.

In abnormally pressured formations extra gas is contained in the larger porosity.

Any washed out or undergauge sections will affect the circulation time.

Several drilling fluid properties can give an insight into the effect of the fluid on hole stability. An increase in fine solids may indicate dispersion of the formation clays.

If KCl is being employed the take­up of K+ by the formation can be interpreted by analysing plots of the K+ and Cl­ concentrations . If the K+ is being consumed the plots will diverge with an increasing Cl­. If the plots are parallel then no K+ is being taken out of the system.

An inhibited polymer drilling fluid should be designed where each major property is controlled with a single function additive. The make up will generally be:
Replacement volume, for new hole drilled, should be with whole, prepared fluid. This will minimise variations to properties resulting from addition variations.