Skip to content
Home » Bits » UNDERSTAND PDC BIT CUTTERS MATERIAL & GET IT TO YOUR ADVANTAGE.

UNDERSTAND PDC BIT CUTTERS MATERIAL & GET IT TO YOUR ADVANTAGE. 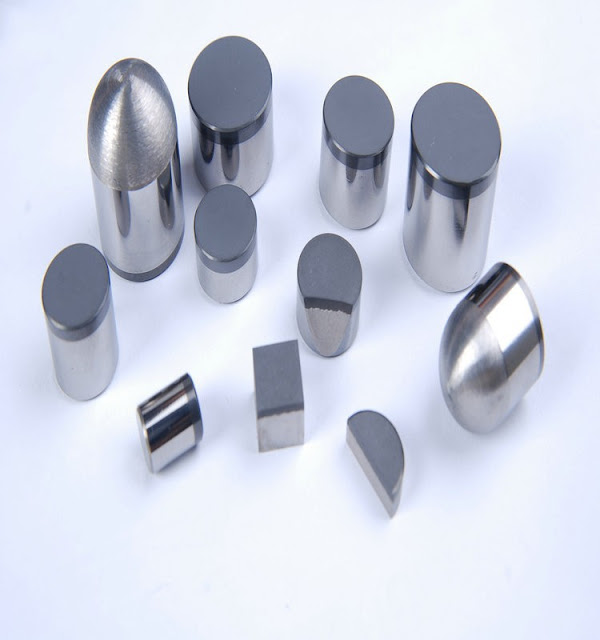 In the second stage of the process, the PCD blank or ‘cutter’ is formed by a liquidphase sintering operation. The diamond powder formed in the first stage of the process is thoroughly mixed with catalyst/binder and exposed to temperatures in excess of 1400 degree C and pressures of 750,000 psi. The principal mechanism for sintering is to dissolve the diamond crystals at their edges, corners and points of high pressure caused by point or edge contacts. This is followed by epitaxial growth of diamond on faces and at sites of low contact angle between the crystals. This regrowth process forms true diamond-to-diamond bonds excluding the liquid binder from the bond zone. The binder forms a more or less continuous network of pores, co-existing with a continuous network of diamond. Typical diamond concentrations in the PCD is 90-97 vol.%.
If one requires a composite compact in which PCD is bonded chemically to a tungsten carbide substrate (Figure 1), some or all of the binder for the PCD may be obtained from the adjacent tungsten carbide substrate by melting and extruding the cobalt binder from the tungsten carbide. The cutters can be manufactured as disc shaped cutters or as stud cutters, as shown in Figure 2.

Thermally Stable Polycrystralline – TSP – Diamond bits were introduced when it was found, soon after their introduction, that PDC bit cutters were sometimes chipped during drilling. It was found that this failure was due to internal stresses caused by the differential expansion of the diamond and binder material. Cobalt is the most widely used binder in sintered PCD products. This material has a thermal coefficient of expansion of 1.2 x 10 ^-5 deg. C compared to 2.7 x 10 ^-6 for diamond. Therefore cobalt expands faster than diamond. As the bulk temperature of the cutter rises above 730 deg C internal stresses caused by the different rates of expansion leads to severe intergranular cracking, macro chipping and rapid failure of the cutter.
These temperatures are much higher than the temperatures to be found at the bottom of the borehole (typically 100 deg C at 8000 ft). They, in fact, arise from the friction generated by the shearing action by which these bits cut the rock.
This temperature barrier of 730 deg C presented serious barriers to improved performance of PCD cutter bits. Manufacturers experimented with improving the thermal stability of the cutters and Thermally Stable Polycrystralline Diamond Bits were developed. These bits are more stable at higher temperatures because the cobalt binder has been removed and this eliminates internal stresses caused by differential expansion. Since most of the binder is interconnected, extended treatment with acids can leach most of it out. The bonds between adjacent diamond particles are unaffected, retaining 50-80% of the compacts’ strength. Leached PCD is thermally stable in inert or reducing atmospheres to 1200 deg C but will degrade at 875 deg C in the presence of oxygen. Due to the nature of the manufacturing process the thermally stable polycrystalline (TSP) diamond cannot be integrally bonded to a WC substrate. Therefore, not only is the PCD itself weaker, but the excellent strength of an integrally bonded Tungsten Carbide (WC) substrate is sacrificed. Without the WC substrate, the TSP diamond is restricted to small sizes (Figure 3) and must be set into a matrix similar to natural diamonds.