What Is The Meaning Of Shock Absorbers

A shock absorber or damper is a mechanical or hydraulic device designed to absorb and damp shock impulses. It does this by converting the kinetic energy of the shock into another form of energy (typically heat) which is then dissipated. Most shock absorbers are a form of dashpot (a damper which resists motion via viscous friction).

Shock Absorbers are used between the bit and drill collars to reduce the vertical oscillation (bouncing) of the drill string.

What Are The Drilling Bit Oscillations

Field studies have shown that the frequency of the oscillations was consistently three oscillations per revolution with a three cone bit. It is believed that the bit does not drill the bottom of the hole evenly (completely flat) with a resulting condition of high and low places, the number of high and low places being the same as the number of cutters on the bit. The peak-to-peak amplitude is approximately 0.5 inch. This bottom hole condition could account for the three oscillations per revolution when drilling with a three cone bit.

How To Use Shock Absorber To Eliminate The Drilling Bit Oscillations

The studies show that the placement of a shock absorber between the drilling bit and the drill collars can:

The Limitations Of Drilling Shock Absorbers

Unfortunately, shock absorbers are prone to mechanical failure due to the complexity of the device and the fact that it cannot be made as strong as the drill collars.

Positioning Of Drilling Shock Absorbers In The Drilling String BHA

For maximum effectiveness, the shock tool should be placed immediately above the bit to minimize the amount of unsprung mass below the tool. It is important that the tool is placed in a position where it is exposed to minimum side loading or bending stress. 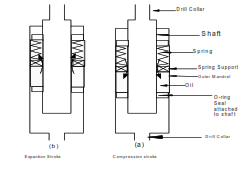 Ideally, the tool should have the same degree of stabilization at both ends to minimize buckling.

Vibrations from the bit cause the shaft to move down inside the mandrel and compress the spring (compression stroke). Some of the vibration force will not be transmitted to the drill string above the tool because some of that force has been stored as energy in the spring, thus reducing the shock or impact on the drill string. As the shaft moves up (expansion stroke) the oil below the spring support between the shaft and mandrel is forced to flow through a small restriction to the upper chamber. The flow of oil generates high pressure drop which is converted to heat, thus dissipating some of the vibration energy into heat.