The trajectory of a deviated well must be carefully planned so that the most efficient trajectory is used to drill between the rig and the target location and ensure that the well is drilled for the least amount of money possible.

The three dimensional system that is generally used to define the position of a particular point along the wellpath is: 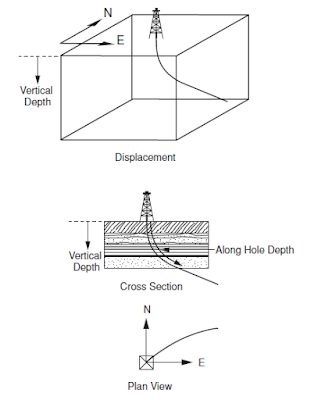 
The Mean Sea Level, MSL is a permanent, national and well documented datum whereas datum such as the Rotary Table Elevation, RTE only exists when the drilling rig is on site. The top of the 20” Wellhead Housing is only available when the wellhead housing has been installed and will be removed when the well is abandoned.

Hence, since the only permanent datum is the MSL (the rig will be removed and the wellhead may be removed on abandonment) the distance between the MSL and the rotary table on the drill floor and the MSL and the wellhead housing must be measured and recorded carefully on the well survey documents. The elevation of the rotary table above the MSL will be measured when the drilling rig
is placed over the drilling location.

Table elevation (RTE) is used as the working depth reference since it is relatively simple, for the driller for instance, to measure depths relative to this point. The elevation of the RTE is also referred to as Derrick Floor Elevation (DFE). Depths measured from these references are often called depths below rotary table (BRT) or below derrick floor (BDF).

The top of the kelly bushing is also used as a datum for depth measurement. In this case the depths are referred to as depths below rotary kelly bushing (RKB).

The depth of any point in the wellpath can be expressed in terms of the Along Hole Depth (AHD) and the True Vertical Depth (TVD) of the point below the reference datum. The AHD is the depth of a point from the surface reference point, measured along the trajectory of the borehole. Whereas the TVD is the vertical depth of the point below the reference point. The AHD will therefore always be
greater than the TVD in a deviated well. Since there is no direct way of measuring the TVD, it must be calculated from the information gathered when surveying the well.

The position of a point in the well can only be defined in three dimensions when, in addition to the TVD of the point, its lateral displacement and the direction of that displacement is known.

The lateral displacement is expressed in terms of feet (or meters) from the wellhead in a Northerly and Easterly direction or in degrees of latitude and longitude. All displacements are referenced to the wellhead position.

The position of the wellhead is determined by land or satellite surveying techniques and quoted in latitude and longitude or an international grid co-ordinate system
(e.g. Universal Transverse Mercator UTM system). Due to the large number of digits in some grid co-ordinate systems, a local origin is generally chosen and given the co-ordinates zero, zero (0,0). This can be the location of the well being drilled, or the centre of an offshore platform. When comparing the position of points in a well, and in particular for anti-collision monitoring, it is important that all coordinate data are ultimately referenced to a single system.