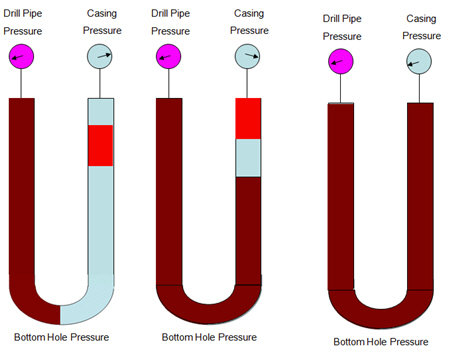 In the Driller's Method, the Kill is split into two circulations.

This method is most used on small land rigs where the Driller may have little help and limited equipment. It is also used on highly deviated and horizontal wells, where the influx is likely to be a swabbed Kick.

In addition the simplicity of the Driller's Method makes it useful when only limited information is available about the well conditions.

1.      The well is closed in and the information recorded.

2.      If a slow circulating rate pressure, PSCR, has been taken, then calculate the pressure required on the Drill Pipe for the first circulation of the well.

3.      Open the choke about one quarter, start the pump and break circulation; then bring the pump up to the KILL RATE.

4.      While the Driller is bringing the pump up to the KILL RATE, the choke operator should operate the choke so as to keep the casing pressure at or near the SICP reading.

6.      The ICP is held constant on the Drill Pipe pressure gauge by adjusting the choke throughout the whole of the first circulation, until all of the Kick fluid has been circulated out of the well. The pump rate must also be held constant at the KILL RATE throughout this period.

7.      Once the Kick is out of the hole, Shut the well in and mix up the kill mud weight required.

NOTE 1: This is a kill weight mud to balance formation pressure. It is the lowest possible mud weight which will kill the well. Once the well is dead, it will be necessary to increase the mud weight further to provide a trip margin.

NOTE 2: Some operators prefer to continue circulating the well while kill weight mud is being mixed. There is no theoretical reason why this should not be done, though it does result in further wear and tear on equipment under pressure - in particular the choke. 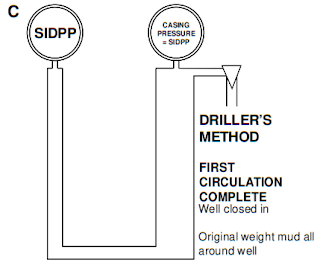 8.      Once the Kill mud is ready, open the choke about one quarter, start the pump and break circulation. Then bring the pump up to the Kill rate.

9.      While the Driller is bringing the pump up to the Kill rate, the choke operator should operate the choke so as to keep the casing pressure steady at the same pressure as when closed in.

10.    While the Drill Pipe is being filled with heavy mud there are two options for keeping B.H.P. constant, either keep the casing pressure constant or make out a graph going from I.C.P. to F.C.P.

NOTE: If the influx was gas and all the gas was not removed in first circulation, the first option of keeping casing pressure constant could lead to higher annular pressures.

(In practice, if all the Kick was properly removed in the first circulation, the choke should not need to be touched once the pumps are steady at the Kill Rate, until Kill mud reaches the bit.)
(FCP :  This is the slow circulating rate pressure, increased slightly for the extra mud weight) 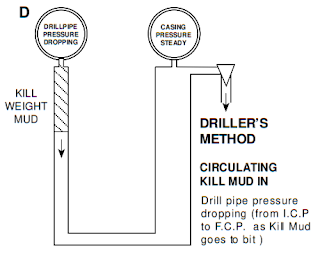 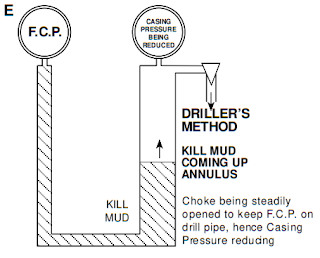 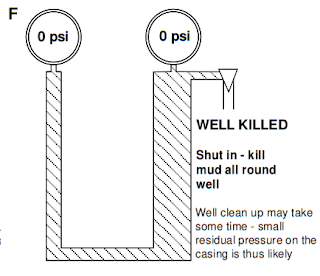 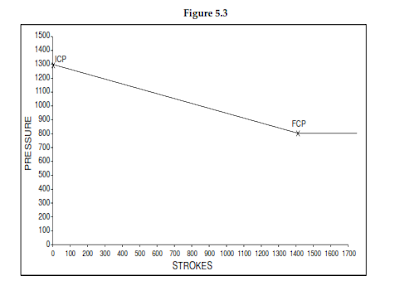 Because of the possibility that the annulus may not be circulated completely clean, during the first circulation, it may be preferable to work out how the Drill Pipe pressure should vary as kill mud is pumped around the well.

This will allow the Drill Pipe pressure to be used throughout, so eliminating the possibility of small
gas bubbles in the annulus producing misleading information.

The following graphs depict the variations in pressure during the well circulation.

If no slow circulating rate pressure has been taken, then the initial circulating pressure can be determined using the start-up procedures described in the circulations of the Driller's Method.

Where the casing pressure has been held constant while the pumps are brought up to a kill rate, the Drill Pipe pressure reading will be the initial circulating pressure.

WARNING: the existence of a predetermined kill rate gives rig personnel a wrong impression that a Kick must be circulated exclusively at this rate.

The procedure consists of:

3.      As soon as the driller has the pumps settled on the new rate, return to the Drill Pipe pressure gauge. Note this new reading is the circulating pressure for the new pump rate and maintain this.

NOTE: This procedure is satisfactory at any time during a kill providing the mud weight in the drill string is not changing during the process. It is however preferable to maintain pump rate constant as much as possible. Any decision to change pump rate should be taken early.

Back To Other Well Control Methods