This process of defining the position of a point relative to a specific reference point can be continued for any number of points. 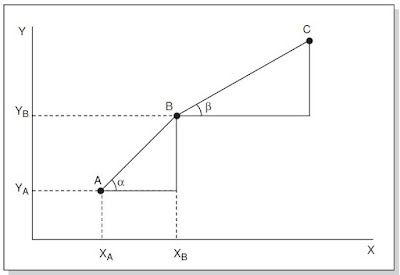 This same principle as that above is applied to wellbore surveying. In the case of wellbore surveys however the procedure must include consideration of the following:
The three dimensional aspect of the problem is not a significant issue since the same process as that outlined above can be applied to the vertical displacement as well as the horizontal displacement of the survey points (stations). The procedure is described below.

The only information that is required to determine the co-ordinates of all points in the well trajectory are therefore:

1- The position of the initial, reference point

2- The measured depth (AHD) of the survey station

The depth of the survey station is provided by the the driller and is calculated on the basis of the length of drillstring in the wellbore and the distance between the drillbit and the survey tool.

3- The direction (Degrees from North) at the survey station

The direction in which the drillbit is pointing when a survey is taken is expressed in degrees azimuth.

Azimuth is the angle in degrees (°) between the horizontal component of the wellbore direction, at a particular point, measured in a clockwise direction from the reference (generally North). Azimuth is generally expressed as a reading on a 0 - 360° (measured from North) scale.

For directional surveying, there are three azimuth reference systems :

Magnetic North (MN)
This is the direction of the horizontal component of the Earth’s magnetic field lines at a particular point on the Earth’s surface. A magnetic compass will align itself to these lines with the positive pole of the compass indicating North.

True (Geographic) North (TN)
This is the direction of the geographic North Pole. This lies on the axis of rotation of the Earth. The direction is shown on maps by the meridians of longitude.

5- A mathematical models of the wellbore trajectory

Tangential Model
This model uses only the angles of inclination and direction measured at the lower survey station. The wellbore path is assumed to be tangential to these angles throughout the survey interval. The larger the angle, and the greater the survey interval, the more inaccurate the results from this model. This model is highly inaccurate and is not recommended.


Balanced Tangential Model
This model uses the survey data from both the upper and lower stations. The model assumes that the well path lies along two equal length, straight line segments. The inclination and direction of each segment is given by the corresponding survey station. The tangential model is therefore applied twice - once to the upper half, once to the lower half. This model approximates more closely to the probable shape of the wellbore and yields more accurate results (especially if the angles are changing rapidly).

Average Angle Model
In this model the inclinations and the directions at the two survey stations are averaged. The wellbore is then assumed to be one straight line over the survey interval having this average direction and inclination. This straight line path is a good approximation provided the survey interval is small, and the rate of curvature is small in the actual wellbore. This model is often used at the rig site since the calculations are fairly simple.

Radius of Curvature Model
This model assumes a curved path which has the shape of a spherical arc passing through the measured angles at the two survey stations. Essentially, the inclination and direction are assumed to vary linearly over the course length. This method is less sensitive to errors, even if the survey interval is relatively long. The calculations however, are complicated and are best handled by computer

Minimum Curvature Model
This model takes the space vectors defined by inclination and direction measurements and smooths these onto the wellbore curve. The curvature of the path is calculated using a ratio factor, defined by the dog-leg of the wellbore. The result of minimizing the total curvature within the physical constraints of the wellbore is an arc. Again the calculations are best handled by computer.