Introduction To Water Based Drilling Mud .

The mud system used most frequently throughout the industry is the water-based system. Water is the continuous phase, but it may contain oil (i.e., emulsion muds) or air (i.e., aerated mud) as the discontinuous phase. The oil must remain as segregated droplets and not combine in a distinct phase termed "discontinuous" (Fig. 1).


Clear, fresh water is one of the oldest drilling muds used in the industry. It is generally used with no special additives except perhaps a corrosion inhibitor. The fresh water may hydrate formation clays and convert itself into a "native" mud. In fact, the term "mud" is believed to have been first used when fresh water and surface soils were mixed to develop a viscous fluid that could increase the hole cleaning characteristics of the fluid.


What Is The Chemicals Which Can Be Added To Water Based Drilling Mud?

Fresh water is often the base fluid when adding many drilling chemicals such as clays, polymers, weight materials, and additives to control various properties.

Why we need Inhibited Water Based Drilling Mud?

An inhibited water-based mud is often used to minimize hole sloughing problems. "Inhibition" refers to retarding the rate at which formation clays hydrate. Hydration reduces the structural stability of the borehole, allowing it to fall, or slough, into the wellbore. Common inhibited muds such as lime muds use calcium to retard hydration, while others use high concentrations of various salts.


Lime muds have been widely used for many years as inhibited fluids. The hydrated lime, which is calcium hydroxide, reduces the amount of water attached to the clay structure. High lime-content water based drilling mud should contain a Pf of 5-9 and a Pm of 2~O to maintain an excess of lime. The amount of undissolved lime can be estimated with Eq. 1:

Low-lime mud have been used successfully during recent years in high temperature wells. High lime concentrations tend to cause clay flocculation in the upper temperature ranges. Low-lime water based drilling mud should contain a Pf of 2-5 and a Pm of 12-18. This mud system must be monitored closely to maintain undissolved lime in the system.

Gypsum (calcium sulfate) water based drilling mud are used commonly in gyp and anhydrite formations. Gyp muds are similar to lime muds since they derive their inhibition properties from soluble calcium and require a chemical thinner for viscosity control. These muds function at lower alkalinity ranges than lime muds and contain more soluble calcium.

This type of water based drilling mud commonly used in offshore drilling are more economical than freshwater systems in some cases. The convenient source of salt water and the elimination of extra storage space on offshore rigs have made this type of mud very popular. Since the seawater contains salt, NaCl, it inhibits the hydration and dispersion of clays. Alkalinities are extremely important and must be monitored closely for the dispersants and clays to react properly.

Saturated salt mud contain a large amount of dissolved salt and therefore can be classified as inhibited muds. However, saturated salt muds are used usually to drill salt domes or thick stringers of salt. Salt contamination and elimination of the development of large cavities in the salt formation are accomplished by saturating a water-based mud with salt.

A dispersed water based drilling  mud usually uses drilling chemicals that cause the clay platelets to "disperse," or separate, within the liquid phase (Fig.2). These dispersed muds tend to have better viscosity control, higher solids tolerance, and better filtration control than nondispersed systems. Dispersed systems are used frequently in drilling young, high-activity clays such as those found in the Gulf of Mexico and Nigeria. A common dispersed system is the ligno-sulfonate mud.

Nondispersed muds are often associated with low solids concentrations and relative low-density weights. These muds do not contain chemical dispersants and are formulated normally with a minimum amount of bentonite. The systems use a polymer(s) that extends the effects of small amounts of bentonite and selectively flocculates undesirable drilled solids. Proper solids control equipment, alkalinities, and bentonite concentrations must be monitored closely for a low-solids nondispersed mud to function effectively.

Flocculated water based drilling mud cause the clay platelets to arrange themselves in an edge-to-face orientation. This arrangement often occurs with the intrusion of some contaminant. Filtration, viscosity, and gel strengths will usually increase dramatically once a mud becomes flocculated. Chemical agents are available that decrease the sensitivity of the edge-to-face attraction of clay particles. These deflocculants restore the clay particles to a dispersed or aggregated state.

Clear water and some brine fluids have been used in drilling operations not requiring high densities and/or high viscosities. This tupe of water based drilling mud have been used extensively in completion and workover operations where very low solids and a clean environment are critical. Brines may range from 8.33 to 19.2 Ib/gal. These brines may be single-, two-, or even three-salt compounds such as the following:

Brine makeup water should be mechanically filtered to eliminate undesirable solids contamination. Brine densities are usually measured at 60°F and, if possible, the density should be calculated from specific gravity as measured with a hydrometer. Tables and charts for brine formulations are included in the Appendix.

Single-salt brines are made from fresh water with the addition of a single salt to achieve the desired density. Density is controlled by adding salt or fresh water. Table.1 shows some of the more commonly used salt systems.

A sodium chloride system (NaCI) is probably the most common brine water used in drilling, completion, and workover operations due to its availability. The maximum density for a sodium chloride brine is 10.0 Ib/gal at 60 °F. Note that a density of 9.7 Ib/gal is relatively easy to achieve. The range from 9.7 to 10.0 Ib/gal requires special attention.

Calcium chloride mixtures are used commonly when densities from 9.7 to 11.6 Ib/gal are required. The CaCl2 fluid is used in many workover and com- pletion operations. The freezing (crystallization) point of an 11.6-lb/gal CaCl2 brine is 44°F, which may cause operating difficulties at low surface temperatures.

High-pressure drilling, workovers, and completion operations occasionally necessitate using densities to 19.2 Ib/gal. Adding calcium chloride and calcium bromide to a zinc bromide solution can achieve a density of 19.2Ib/gal. Various concentrations of the three salts, in addition to other special products, can be used to formulate summer and winter blends.

Solution:
From Table B3 (Appendix):

Occasionally, it is necessary to dilute CaC12 brine by adding water. Proper dilution can be achieved with Eq. 8.2 and Table B4:

Solids Systems (solids tolerance). The solids concentration in the water based drilling mud may be used to describe the system. A clear water mud has virtually no detectable solids. A low-solids system has some solids, although efforts are usually made to minimize solids concentration. A high-solids system is normally used when "mud-making" formations are penetrated or high mud weights requiring barite are used. The solids content of a high-weight mud must be controlled within acceptable ranges. The degree to which formation solids contaminate a water based drilling mud depends on the characteristics of the continuous phase and the type and amount of clay in the rock cuttings. Excess solids may be controlled by surface mechanical equipment and/or water dilution. Water dilution is the most expensive process for correcting drilled solids accumulation. Fig.5 shows acceptable ranges for mud solids as developed by several mud companies.


Example 3
A drilling engineer plans to use a lignosulfonate mud to drill a deep, high pressure well in the Niger basin. The pore pressures are provided below. Develop a mud program showing mud weight, minimum and maximum solids levels, and recommended rheological properties. Use Fig. 5 and Table.2 . The engineer normally uses a 0.3-lb/gal mud weight safety margin 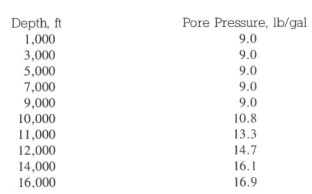 
The Result will be as following: 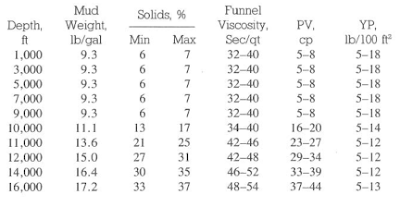