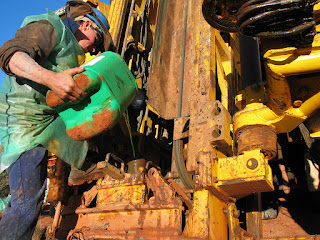 Commercial clays are used to control the viscosity of water based muds. These are graded according to their yield. The yield of a clay is defined as the number of barrels of 15 centipoise viscosity mud which can be obtained from 1 ton of dry clay. (A 15 centipoise viscosity will support barite). Wyoming bentonite has a yield of about 100 bbl/ton, whereas native clays may only yield 10 bbl/ton. The result of this would be that the native clay would cause a higher solids content and mud density than the Wyoming bentonite to build the same viscosity. The specifications for bentonite are laid down by the API and are shown in Table 4. The yield of a clay will be affected by the salt concentration in the mix water. The hydration and therefore dispersion of the clay are greatly reduced by the presence of Ca2+ and Mg 2+ ions. To overcome this problem various measures can be taken:

To reduce the viscosity of the mud:

The use of screens, desilters and other mechanical devices will reduce viscosity, but chemical additives may also be used. These chemicals produce negatively charged anions in solution and thereby reduce the positive charge on the edge of the clay plates. This reduces the edge-to-face association and therefore reduces viscosity. Such chemicals are called thinners (or dispersants) and include: Phosphates; Lignites; Lignosulphonates; and Tannins.

Barite (barium sulphate, BaSO4) is the primary weighting material used in muds. Densities of 9 ppg to 19 ppg can be achieved by mixing water, clay and barite. The API specification for barite is shown in Table 5. Other weighting materials are calcium carbonate and galena (lead sulphide). The drill solids from the formation will increase the mud density if they are not separated out. This will be discussed under solids control.

Loss of fluid from the mud occurs when the mud comes into contact with a permeable zone. If the pores are large enough the first effect will be a spurt loss, followed by the buildup of solids to form a mud cake. The rate at which fluid is lost is a function of the differential pressure, thickness of filter cake and viscosity of the filtrate. Excessive filtration rates and thick wall cake can lead to problems such as:

• Clays - Bentonite is an effective fluid loss control agent because of its particle size and shape, and also because it hydrates and compresses under pressure. The particle size distribution is such that most particles will be less than 1 micron. Care should be taken not to remove these small particles by using a centrifuge for solids control.

• Starch - These organic chemicals will swell rapidly and seal off the permeable zones effectively.

• CMC - This is an organic colloid (sodium carboxyl-methyl cellulose). The long chain molecules can be polymerized into 3 different grades (high, medium and low viscosity). It is thought that CMC controls filtration by wedging long chain polymers into the formation and plugging the pores. CMC works well in most water-based muds, but less effective in high salt concentrations (>50,000 ppm).

• Polyacrylates (Cypan) - These are long chain polymers which become absorbed onto the edge of clay particles.

• Lignosuphonates - Similar in action to starch in reducing fluid loss.

• Polyanoinic cellulose (Drispac) - An organic compound which is used to control fluid loss in high salt concentrations, and is often used in low solids mud. May also be used as a viscosifier.

The water loss allowable in any particular area will largely depend on experience. As the well is being drilled the fluid loss must be adjusted as new formations are penetrated. The surface hole may be drilled with a fluid loss of 20 cc, but across productive formations it will be reduced (down to possibly 5 cc). Control over fluid loss depends on the correct addition of chemicals and keeping the clay solids dispersed. Fluid loss control agents may also act as thinners, or viscosifiers under certain circumstances, and react unfavourably with other chemicals in the mud.

Caustic soda NaOH is the major additive used to keep the pH of the mud high. This is desirable to prevent corrosion and hydrogen embrittlement. The pH of most muds lies between 9.5 and 10.5. Caustic potash, KOH and slaked lime, Ca(OH)2 may also be used.

Various substances may enter the mud and cause an adverse effect on the quality of the mud and reduce its efficiency. These contaminates must be removed. The main contaminates are listed below:

• Calcium(Ca2+)-may enter from cement,gypsum,lime or salt water. It reduces the viscosity building properties of bentonite. It is usually removed from fresh water muds by adding soda ash Na2CO3, which forms insoluble CaCO3. If calcium is present in the mud the pH will normally be too high.

• Carbon dioxide (CO2) - present in formations which when entrained in the mud can cause adverse filtration and gelation characteristics. To remove CO2 calcium hydroxide can be added to precipitate CaCO3.

• Hydrogen sulphide (H2S) - present in formations. Highly toxic gas which also causes hydrogen embrittlement of steel pipe. Add NaOH to keep pH high and form sodium sulphide. If the pH is allowed to drop the sulphide reverts back to H2S

• Oxygen (O2) - entrained into mud in surface pits, causes corrosion and pitting of steel pipe. Sodium sulphite (Na2SO3) is added at surface to remove the Oxygen.