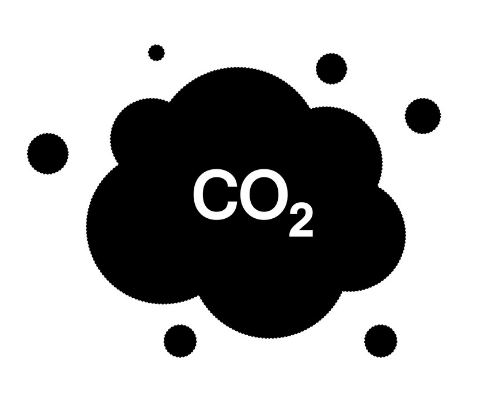 Introduction To Mud Contamination By CO2

Carbon dioxide (CO2) is a common constituent of natural gases and is present in most types of formation fluids. Carbon dioxide dissolves in water, forming carbonic acid that lowers the pH. This lowers the alkalinity of water based muds changing hydroxyl ions (OH–) to bicarbonates (HCO3–) and carbonates (CO3-2) ions. Carbonates can be introduced into Water Based Mud from:

The effect of CO2 contamination on any drilling fluid mud can be severe if corrective treatments are not made. Carbon dioxide can also cause severe corrosion problems if not treated. CO2 contamination (carbonates) can adversely affect drilling fluid properties. Gel strengths become progressive and the yield point (check also Yield Point In Drilling Mud Formula) increases as the drilling fluid becomes flocculated. The mud may have a dull/flat appearance The funnel viscosity is higher at the flow line than the viscosity at the suction pit. The drilling fluid may become extremely thick on bottoms up after periods of static condition, such as a long or short trip.

Water based drilling fluids contaminated with CO2 can have decreases in:

CO2 contamination can create a condition where the Pf , pH and solids may all be in the desired range, but, due to the lack of hydroxyl ions the rheological and filtration values do not respond to treatments. Deflocculants such as Q-BROXIN require hydroxyl ions to perform properly. These conditions can create problems downhole, such as increasing the:

If the contamination is from a CO2 influx, increase mud weight to stop further influx, if possible,
then treat out the carbon dioxide.  Even high density fluids contaminated with CO2 can be controlled satisfactorily provided the fluid contains low concentrations of bentonite and reactive drilled solids. Pretreat the system with BARACOR 95 (a highly active inhibitor that is stable up to 350°F [177°C]) if high levels of carbon dioxide are anticipated.  BARACOR 95 has proven to be an effective tool in eliminating the flocculation effects seen with large CO2 influxes.  BARACOR 95 does not eliminate the CO2, it scavenges the gas downhole to form a BARACOR 95.CO2 complex, rendering it inert. Traditional lime additions at the surface liberates the CO2 from the BARACOR 95. The CO2 then reacts with lime to form insoluble calcium carbonate.  This process re-activates the BARACOR 95 without consuming it. BARACOR 95 does not replace surface lime additions as it is the two-step process that efficiently removes the CO2.

The presence and quantity of CO2 in the filtrate may be determined by two different methods, Garrett Gas Train and back titration.

The Garrett Gas Train is the most widely used portable instrument for the determination of soluble sulfides and carbonate concentrations in drilling fluid. Soluble sulfides include H2S and the sulfide (S-2) and bisulfide (HS–) ions. Total soluble carbonates include CO2 and the carbonate (CO3–2) and bicarbonate (HCO3) ions. Mud filtrate is acidified inside the gas train, converting all sulfides to H2S or all carbonates to CO2, depending upon the test. The gas train separates the gas from the liquid and an inert carrier gas transports the gasses through the separate chambers. In chamber three, the gas stream is passed through a Tube, which responds to H2S or CO2 by darkening along its length, with the stain length proportional to the amounts of concentrations in the filtrate. For qualitative H2S analysis, lead acetate paper disks may be inserted to determine the presence or absence of sulfides. 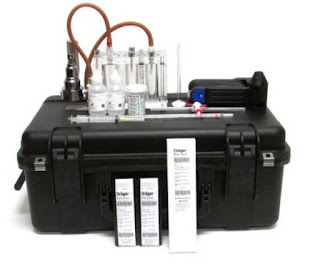 Back titration will determine the amounts of carbonates, bicarbonates and hydroxides in the filtrate.

After accurate testing for alkalinity changes, a treatment plan can be made and verified through pilot test and hot rolling. Treatments should begin as soon as CO2 verified contamination has been. CO2 can be removed effectively by treating with caustic soda (sodium hydroxide, NaOH) and lime (calcium hydroxide, Ca(OH)2). Lime treatments are preferable because contaminant are removed from solution, as shown in the reactions below. All reactions shown are reversible, dependent on the pH of the fluid and lime or caustic soda concentration.

Lime is the most commonly used product and should be added at a rate of 0.0130 lbs/bbl (0.037 kg/m3) lime per epm of carbonates. Thinners may be needed to deflocculate the system after the carbonates have been treated, but the over use of thinners can itself be a problem. BARAFILM (a filming agent) is recommended in cases of severe contamination to minimize or reduce corrosion problems by laying a protective film on the drill pipe.

Maintain 200 mg/L calcium in the filtrate to buffer the contamination. Avoid overtreatments of
soda ash or sodium bicarbonate when drilling cement.

This Experimental Study of the Effects of CO2 Gas Kick on the Properties Water-Based Drilling Fluid research investigates the effect of CO2 gas kick on the properties of a Water Based Mud during drilling. This research is necessary because of the global program of CO2 capture and storage in underground reservoir and also because the success of a drilling operation is greatly dependent on the drilling mud design as a result of direct relationship between drilling mud properties and the safety factor of drilling operation. This research aims at finding the implication of a CO2 leakage from a nearby CO2 storage reservoir on drilling activities in a given reservoir. A basic water-based mud was prepared and the properties of the mud were investigated as CO2 is injected into the mud at interval to simulate CO2 gas kick during drilling. The measured properties of the injected mud indicated that there was a 16.3% reduction in the density of the mud upon CO2 injection within the first 11days. That is, there was a thinning of the mud which will result into pressure under-balance resulting into further influx of the CO2 to the well been drilled and this is dangerous for the drilling operation except the surface pressure is increased or a weighting material added to the mud. The study shows that there was a corresponding dangerous 75.23% reduction in the viscosity of the mud within the first 11 days of contact with CO2 which makes the mud totally ineffective in its ability to clean the well and transport drill cuttings to surface and this will result into lower drilling rate and higher drilling cost (check also oil well drilling well cost per foot).