The alertness in determining early warning signs in well control is of the upmost importance to wellbore safety. Careful observance and positive reaction to these signs will keep the well under control and prevent the occurrence of a well flow situation.

The various signs that have been recorded as early warning indicators are not consistent in all situations. The signs however may have to be used collectively as one indicator may not accurately provide the warning of getting into an unbalanced situation. Even though the series of signs may change between wells, early warning indications can be found from the following list.

When drilling ahead and using consistent drilling parameters, as the bit wears, a normal trend of decrease penetration rate should occur. If the differential pressure between the hydrostatic pressure of the drilling fluid and formation pore pressure decreases, an increase in the drilling rate occurs as the chip hold down effect is reduced.

Increased drag and rotary torque are often noted when drilling into overpressured shale formations due to the inability of the underbalanced mud density to hold back physical encroachment of the formation into the wellbore.

Drag and rotating torque are both indirect and qualitative indicators of overpressure. They are also indicators of hole instability and other mechanical problems.

Torque and drag trend increases often indicate to the driller that a transition zone is being drilled. Up drag and down drag as well as average torque figures should be recorded on each connection. These trends are valuable when comparing other trend changes.

The density of shale normally increases with depth, but decreases as abnormal pressure zones are drilled. The density of the cuttings can be determined at surface and plotted against depth. A normal trend line will be established and deviations can indicate changes in pore pressure.

4- INCREASE IN CUTTING SIZE AND SHAPE

In transition zones or in abnormally pressured shales (sandy shales and bedding sand streaks) the shales break off and fall into hole because of under balanced condition (pore pressure greater than mud hydrostatic pressure). Water wetting may further aggravate this problem.

Changes in the Shape of Shale Cuttings can occur as an underbalanced situation is developing. The particles are often larger and may be sharp and angular in the transition zone. Extra fill on bottom may coincide with the trend change. Severe sloughing will often cause changes in pressure and stroke relationship.

Normally pressured shales produce small cuttings with rounded edges and are generally flat, while cuttings from an over pressured shale are often long and splintery with angular edges. As reduction of hydrostatic differential between the pore pressure and bottomhole pressure occurs, the hole cuttings will have a greater tendency to come off bottom. This can also lead to shale expansion causing cracking, and sloughing of the shales into the wellbore. Changes in cuttings shape and cuttings load over the shakers needs to be monitored at surface.

Water cut mud or a chloride (and sometimes calcium) increase that has been circulated from bottom always indicates that formation fluid has entered the wellbore. It could be created by swabbing or it could indicate a well flow is underway. Small chloride or calcium increases could be indicative of tight (non- permeable) zones that have high pressure.

In certain type muds, the viscosity will increase when salt water enters the wellbore and mixed with the mud. This is called flocculation because the little molecules of mud solids, which are normally dispersed, form little "group"€ called flocs. These flocs cause viscosity and gel increases.

In other type muds you might see a viscosity decrease caused by water cutting (weight decrease). This is true when operating with low pH salt saturated water base muds.

In oil muds, any water contamination would act as a "solid" and cause viscosity increases.

Gas cut mud would be fluffy and would have higher viscosities (and lower mud weight).

IT IS ESSENTIAL TO KNOW THAT TREND CHANGES ARE MORE IMPORTANT THAN ACTUAL VALUE OF THE CHANGE.

6- INCREASE IN TRIP, CONNECTION AND A BACKGROUND GAS

Return mud must be monitored for contamination with formation fluids. This is done by constantly recording the flowline mud density and accurately monitoring gas levels in the returned mud.

Gas .cut mud does not in itself indicate that the well is flowing (gas may be entrained in the cuttings). However, it must be treated as early warning of a possible kick. Therefore pit levels should be closely monitored if significant levels of gas are detected in the mud.

An essential part of interpreting the level of gas in the mud is the understanding of the conditions in which the gas entered the mud in the first place.

Drilled Gas
When porous formations containing gas are drilled, a certain quantity of the gas contained in the cuttings will enter the mud.

Gas that enters the mud, unless in solution with oil base mud and kept at a pressure higher than its bubble point, will expand as it is circulated up the hole, causing gas cutting at the flowline. Gas cutting due to this mechanism will occur even if the formation is overbalanced. Raising the mud weight will not prevent it.

It should be noted that drilled gas will only be evident during the time taken to circulate out the cuttings from the porous formation.

Connection Gas
Connection gases are measured at surface as a distinct increase above background gas as bottoms up occurs after a connection.

Connection gases are caused by the temporary reduction in effective total pressure of the mud column during a connection. This is due to pump shut down and the swabbing action of the pipe.

In all cases, connection gases indicate a condition of near balance. When an increase trend of connection gases are identified, consideration should be given to weighting up the mud before drilling, operations continue and particularly prior to any tripping operations.

Trip Gas
Trip gas is any gas that enters the mud while tripping the pipe with the hole appearing static. Trip gas will be detected in the mud when circulating bottoms up occurs after a round trip.

If the static mud column is sufficient to balance the formation pressure, the trip gas will be caused by swabbing and gas diffusion.

Significant trip gas may indicate that a close to balance situation exists in the hole.

Gas Due to Inadequate Mud Density
Surface indication of an underbalanced formation depend on the degree of underbalance, as well as the formation permeability. Drilling of a permeable formation that is significantly overbalanced will cause an immediate flow increase followed by a pit gain.

7- CHANGE IN THE TEMPERATURE OF THE RETURN DRILLING MUD

The temperature will normally take a sharp increase in transition zones. The circulating rate, elapsed time since tripping and mud volume will influence flowline temperature trends.

The temperature gradient in abnormally pressured formations is generally higher than normal. The temperature gradient decreases before penetrating the interface and, therefore marked differences can give and early indication of abnormal pressures. This is usually a surface measurement which has a tendency to be influenced by operating factors.

The D-Exponent will be plotted by the well loggers and maintained current at all times. This value was introduced in the mid sixties to calculate a normalized penetration rate in relation to certain drilling parameters. 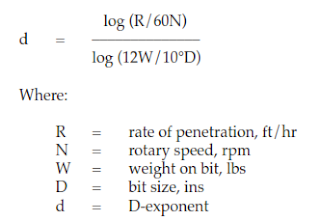 The D-exponent may be corrected and normalized for mud weight changes and/ or ECD (equivalent circulating density) by the following:

A plot of Dc-Exponent versus depth in shale sections, has been used with moderate success in predicting abnormal pressure. Trends of Dc-exponent normally increase with depth, but in transition zones, its value decreases to lower than expected values.

Mud logging companies have further variations/models which try to normalize for other parameters (such as bit wear and rock strength) to varying degrees of success. An illustration of a Dc plot is attached as figure 3.3. 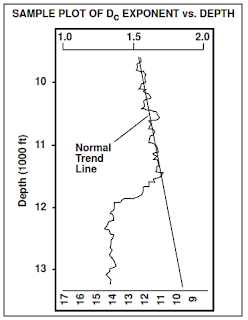