HOW TO PERFORM THE CASING DESIGN GRAPHICAL METHOD

Since the Casing Collapse and Casing Burst loads vary linearly with depth, a plot may be made  using  the Example On The Previous Post. 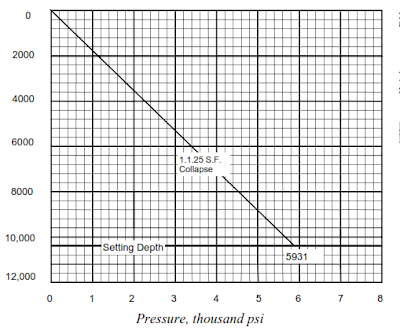 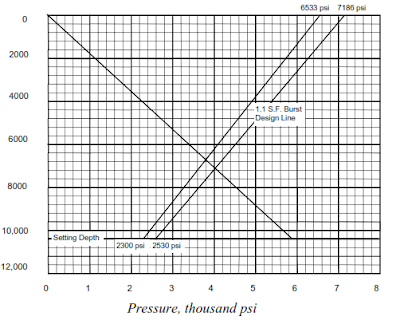 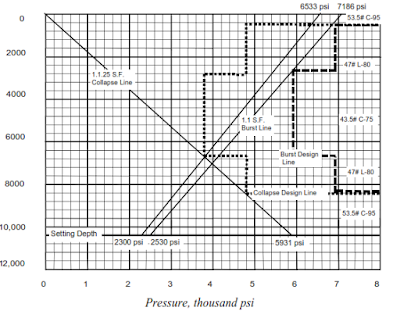 Above the cement top and when the casing is in tension, the casing collapse ratings are reduced by the effect of tension on collapse.

At changeover depths above the cement top, the axial stress is calculated. Where the pipe is in tension, a percent of rated collapse is read from Table below based on the Axial Tension. Using the percent of rated collapse multiplied by the changeover depth adjusts the depth to the correct depth. The casing collapse design factor at the bottom of the weaker section then is calculated to determine if the casing collapse design requirements are sufficient. If the depth is not correct, the design factor calculated times the depth used will adjust the changeover point to the correct depth. By repetition the correct depth will finally be selected. If the pipe is not in tension, plot the collapse rating of the next weaker section in collapse on the design line and continue the design as before. 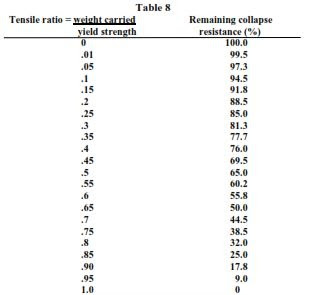 As the design continues upward from the bottom a depth will be encountered where casing collapse no longer controls the design. Above this depth the design will be controlled by burst or tension. If burst controls the design, the burst ratings of the casing are plotted on the  burst  design  line  and  the  burst  loads  are  read  from  the  burst  load  line  at  the corresponding depth. Changeover depths are read directly from the graph. If tension is controlling the design, the changeover depth is calculated directly. The changeover depth is calculated by using the tension rating divided by 1.6 and subtracting the buoyed weight of the pipe below; from this remainder divide by the buoyed weight per foot of the pipe used to determine the footage of pipe to be used.