Procedures To Get Free From Differential Stuck Pipes 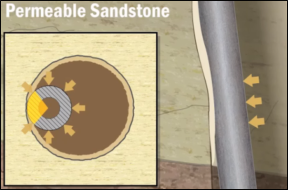 Consider The Following When You Have A differential Stuck Pipe

Decreasing hydrostatic pressure is one of the things to think about for decreasing Sticking force and loosening Differential Stuck in the Drill String.

But off course take in your consideration the following:

Differentially Sticking on the Drill String can be solved by spotting a pill called pipe free pill as soon as stuck happen. These agents work on attacking and breaking down the drilling mud filter cake, so that It reduces the bonding in between the mud cake and the Drill String.

In some cases you may leave the pill to soak while continuously work the torque and jarring down or jarring up without torque. The soaking time may be up to 12 hours but the problem that you may have other problems from not circulating the well in the same time so you have another choice to circulate with lower rate and prepare another pill.

In 2013, while drilling a horizontal well in the Vankor field of Eastern Siberia, Russia, an operator was challenged to overcome the following difficult well profile when drilling into the Nizhnekhetsk formations:»160° turn by azumuth»Projected displacement of 1,228 meters (4,029 feet)»Unstable argillite drilled out with an inclination of 70°»Drilling in productive intervals with a formation pressure gradient of 0.1 kg/cm3»Mud weight of 1.20 g/cm3The well had a measured depth (MD) of 3,640 meters (11,942 feet) and true vertical depth (TVD) of 2,770 meters (9,088 feet). The bottomhole assembly (Bottom Hole Assembly BHA) was differentially stuck in a permeable shale interval at 3,626 meters (11,896 feet) while reaming the well before running the 178-mm casing. The first attempt to free the downhole instrument was to spot 28 m3 of crude oil and to allow four hours for reaction and soaking, and was no success.

An Operator in Canada used Gen-1 package of Pruitt MPD services to unstuck Drill Pipe. When drilling with 1.32 SG mud, operator encountered Kick. An initially calculated 1.40 SG became insufficient and the mud weight was increased to 1.67 SG. And the Drill Pipe got stuck.