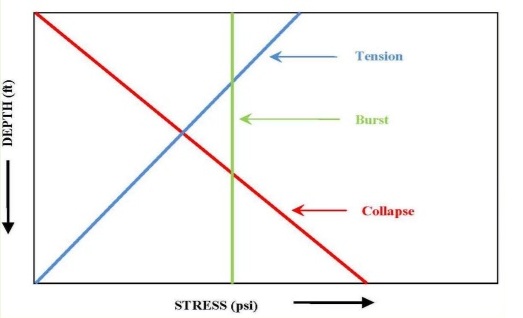 Design loading conditions for surface casing are illustrated in below drawing for burst, collapse, and tension considerations.

The max internal pressure used for the Burst design is based on a Well Control condition assumed to occur while circulating out a large kick.

The max external pressure used for the Collapse design is based on a severe lost circulation problem.

The max axial Tension  loading condition is based on assumption of stuck casing while the casing is run in the hole before cementing operations.

The design pressure at the casing seat =  Fracture Pressure + Safety Margin.
So that to allow for an injection pressure that is slightly higher than the fracture pressure.  If the fracture gradient is not known, a gradient of 1.0 psi/ ft may be safely assumed.

The burst Load at the surface = Surface Pressure inside the casing.

Multiplying the burst loads at the two points by a safety factor determines the burst design line.

Now lets consider the following:
When correcting the collapse-pressure rating of the casing, it is recommended that the axial tension be computed as the hanging weight of the casing for the hydrostatic pressures present when the maximum collapse load is encountered plus any additional tension put in the pipe during and after landing.

The beneficial effect of pressure inside casing can also be taken into account by the consideration of a maximum possible depression of the mud level inside the casing. A safety factor generally is applied to the design-loading condition to provide an additional safety margin. The minimum fluid level in the casing while it is placed in the well depends on field practices.

The casing usually is filled with mud after each joint of casing is made up and run in the hole, and an internal casing pressure that is roughly equivalent to the external casing pressure is maintained. However, in some cases the casing is floated in or run in at least partially empty to reduce the maximum hook load before reaching bottom. If this practice is  anticipated, the maximum depth of the mud level in the casing must be used in collapse calculations.

The design load is usually based on conditions that occur when the casing is run such as casing stuck.

Once the casing design is completed, maximum axial stress anticipated during cementing, casing landing, and subsequent drilling operations should also be checked to ensure that the design load is never exceeded.

When the selection of casing weight and grade in a combination string is determined by collapse, a simultaneous design for collapse and tension is best. The greatest depth at which the next most economical casing can be used depends on its corrected collapse pressure rating, which in turn depends on the axial tension at that depth. Therefore, the corrected collapse-pressure rating cannot be computed until the axial tension is calculated.

Now let's move to the next subject