5 WAYS TO BE CONSTANTLY IMPROVING YOUR BARITE SAGGING PROBLEM

When weighted muds are used in highly deviated wells, there is the tendency for barite to settle towards the low side of the hole, creating a stratification of lighter mud on top and heavier mud on bottom. The heavier layer then begins to migrate downwards along the length of the hole due to the gravitational pull. This continuous movement of the mud prevents the development of more substantial gel strengths, compounding the settling problem. Variations in hydrostatic head can cause formation fracturing with accompanying loss of circulation, possibly leading to an influx of formation fluids. 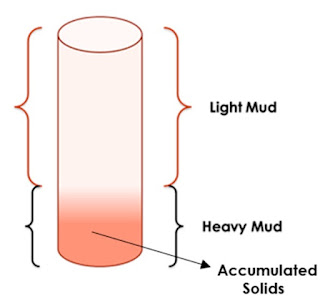 Barite sag can be troublesome and time consuming to correct, and therefore, very expensive. While sag is more of a problem in angled wells, it has also been observed in vertical wells.


How Barite Sag Is Initiated

The mechanism by which barite sag develops is not clearly defined, but is believed to occur undern low shear rate conditions. In laminar flow, shear is generated because fluid layers near the wall or pipes moves at a slower rate to that further from the wall or pipe. The velocity of a layer relative to the layer next to it is called the shear rate.

Shear rate is defined as the velocity gradient measured perpendicularly to the fluid flow and is usually reported in reciprocal seconds (sec^-1).

The commonly held belief is that in an inclined well bore; low shear rates sufficiently interfere with the gel structure of a mud to allow downward movement of the coarser barite particles. The motion of these particles displaces lighter fluid up towards the high side of the hole. The perception is that the range of shear rates required to set up this behavior is predominant underneath an eccentric pipe. Some doubts have been raised regarding this area of the well’s geometry being the only contributor to sag. It is difficult to understand how occasionally large mud weight reductions can be generated from such relatively small volume of mud.

In reaching these conclusions many wells were analyzed and only one incidence was found where barite sag was reported while drilling. This occurred while sliding and was corrected by short periods of rotation. All other reported instances of barite sag coincided with running casing, particularly after thinning the mud.

Barite sag  will not be seen in the surface tanks. It can be only detected by frequently checking the fluid density at the flow line.
The most critical time for Barite sag being during periods of relative inactivity, when the fluid has had minimal agitation, times such as
When circulation is resumed after these types of activities, the density at the flow line must be checked continually and the data recorded. All results must be adjusted to compensate for fluctuations in temperature, using a temperature chart, located at the shale shakers.

A symptom of barite sag would be when density checks at the shakers, see a drop in density, followed by an increase, to be then followed eventually, by mud weight of the correct density. This idealized cycle of mud weights seen at the shale shakers may not bee seen as it could be masked by new barite additions.


Historical data has shown that weight measurements indicating heavy mud, is not always seen to follow light mud and that the correct density is then only achieved when fresh barite is added. Heavy mud has been seen on some occasions.

Whether or not heavy mud is measured on any particular occasion may depend on rig activity. For instance, the barite may have settled on the low side and circulating without rotation, may not reintroduce it back into the circulating mud and not seen at surface. If this is the case, if heavy mud is to be seen, it may happen after trips with pipe, rather than when for instance, running casing. It is difficult to envisage a sag-related mechanism that could result in heavy mud being present in the annulus, without the presence of light mud somewhere in the circulating system. However, the absence of reported light mud, may be explained by the use of heavy slugs, pumped prior to pulling out of the hole.

Investigated instances of sag have shown tell tale symptoms, with the earlier arrival of light mud at the shakers, usually as soon as the pumps were turned on, then followed by a gradual increase in density until the correct mud weight, or on occasion, some heavy mud has been seen.

Incidents of barite sag have been reported on highly extended or deviated wells numerous occasions since the mid 1980’s. Sag can occur in either dynamic or static conditions, and may be indicated by variations in mud weight when circulating.


Hole conditions which may influence sag tendency are:

Maximum and minimum mud weights should be recorded when circulating bottoms up after trips in deviated wells, especially after logging. It is important to maintain uniform mud weight throughout the circulating system. Efforts should be made to treat and equalize any imbalance as quickly as possible.
If the equivalent circulating density (ECD) is close to the fracture gradient, this could require circulating until density is homogeneous prior to resuming drilling operations.

Note:
When using invert emulsion muds in high temperature wells, it is important to measure the temperature at which the mud weight is recorded to avoid misinterpretations between barite sag and thermal expansion/contraction effects.

The best treatment to prevent barite sag is to ensure sufficient gels and low end rheology.

The video demonstrates the vast improvement of the mud condition of the base rig mud sample after being treated with emulsifiers and small amounts of viscosifier.