A steerable drilling system allows directional changes (azimuth and/or inclination) of the well to be performed without tripping to change the BHA, hence its name.

It consists of: a drill bit; a stabilized positive displacement steerable mud motor; a stabilizer; and a directional surveying system which monitors and transmits to surface the hole azimuth, inclination and toolface on a real time basis.


The capability to change direction at will is made possible by placing the tilt angle very close to the bit, using a navigation sub on a standard PDM. This tilt angle can be used to drill in a specific direction, in the same way as the tilt angle generated by a bent sub with the the drill bit being rotated by the mud motor when circulating.

However, since the tilt angle is much closer to the bit than a conventional bent sub assembly, it produces a much lower bit offset and this means that the drill bit can also be rotated by rotating the entire string at surface (in the same way as when using a conventional assembly).

This does not alter the fact that the effect of the bit tilt angle will be eliminated by the rotation of the entire assembly.

The directional tendencies of the system are principally affected by the navigation sub tilt angle and the size and distance between the PDM stabilizer and the first stabilizer above the motor.

The steerable drilling systems are particularly valuable where: changes in the direction of the borehole are difficult to achieve; where directional control is difficult to maintain in the tangent sections of the well (such as in formations with dipping beds) or where frequent changes may be required.

The steerable systems are used in conjunction with MWD tools which contain petrophysical and directional sensors. These types of MWD tools are often called Logging Whilst Drilling, LWD tools.

The petrophysical sensors are used to detect changes in the properties of the formations (lithology, resistivity or porosity) whilst drilling and therefore determine if a change in direction is required.

Effectively the assembly is being used to track desirable formation properties and place the wellbore in the most desirable location from a reservoir engineering perspective.

The term “Geosteering” is often used when the steerable system is used to drill a directional well in this way.

Steerable systems are compatible with either tricone or PDC type bits. In most cases, a PDC bit will be used since this eliminates frequent trips to change the bit.

The motor section of the system causes the bit to rotate when mud is circulated through the string. This makes oriented drilling possible. The motors may also have the navigation sub and a bearing housing stabilizer attached to complete the navigation motor configuration.

The navigation sub converts a standard Mud motor into a steerable motor by tilting the bit at a predetermined angle. The bit tilt angle and the location of the sub at a minimal distance from the bit allows both oriented and rotary drilling without excessive loads and wear on the bit and motor. The design of the navigation sub ensures that the deflecting forces are primarily applied to the bit face (rather than the gauge) thereby maximizing cutting efficiency.

Two types of subs are presently available for steerable Systems:


The DTU and TKO both utilize double tilts to produce the bit tilt required for hole deflection.

Two specially designed stabilizers are required for the operation of the system and influence the directional performance of a steerable assembly.
The motor stabilizer or Upper Bearing Housing Stabilizer, UBHS is an integral part of the navigation motor, and is slightly undergauge.
The upper stabilizer, which defines the third tangency point, is also undergauge and is similar to a string stabilizer.
The size and spacing of the stabilizers also can be varied to fine-tune assembly reactions in both the oriented and rotary modes.

A real time downhole survey system is required to provide continuous directional information. A measurement while drilling, MWD system is typically used for this purpose. An MWD tool will produce fast, accurate data of the hole inclination, azimuth, and the navigation sub tool face orientation. In some cases, a wireline steering tool may be used for this purpose.

Dogleg Produced by a Steerable System

When oriented drilling, the theoretical geometric dogleg severity or TGDS produced by the system is defined by three points on a drilled arc . The three points required to establish the arc are:

The radius of the arc is further determined by the tilt of the navigation sub, as seen in the Figure 12. The following basic relationship is produced by mathematical
derivation.

Operation of a Steerable System

As described above, the steerable system can drill directionally or straight ahead, as required. This enables the driller to control the well’s trajectory without making time consuming trips to change bottom hole assemblies.

To steer the hole during kickoffs or course corrections the system is oriented using MWD readings so the bit will drill in the direction of the navigation sub’s offset angle. When drilling in this way
the system is said to be drilling in the oriented or sliding (since the drill string is not rotating) mode. The bit is driven by the down hole motor, and the rotary table is locked in place, as it is when conventional motor drilling.

As mentioned previously, the system’s two stabilizers and bit serve as the tangency points that define the curve to be drilled by the oriented assembly. The dogleg rate produced can be controlled
by varying the placement and size of the stabilizers, by using a DTU with a different offset angle, or by alternating drilling with oriented and rotary intervals. 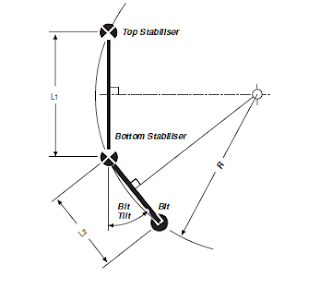 The system can also be used to drill straight ahead by simple string rotation. The rotary table is typically turned at 50-80 RPM while the motor continues to run. When drilling in this way the system is said to be drilling in the rotating mode.

Through careful well planning and bottomhole assembly design, oriented sections are minimized and the assembly is rotated as much as possible. This maximizes penetration rates while keeping the well on course. Survey readings from an MWD tool enable efficient monitoring of directional data so the driller can maintain the wellpath close to the desired path. Slight deviations can be detected and corrected with minor oriented drilling intervals before they become major problems.