Drilling Cuttings (Why it may be difficult to examine)

Samples are examined under a microscope for:

The objective is to depict changes of lithology and appearance of new formations. The microscope and ultraviolet light are used as complementary tools in reconstructing the characteristics of the originating strata. An estimate of the percentages of lithology, staining, and porosity are made with great care since factors such as grain shape and size, color, distribution, etc. can affect the relative percentages Figure.1. 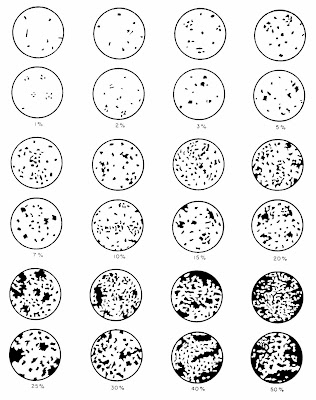 There are many potential sources of contamination when undertaking estimates of lithology percentages. Some examples are:

(cuttings from previously drilled intervals rather than fr
om the bottom of the hole) Although the cuttings are first washed through a coarse sieve to remove cavings, some may remain in the sample.

Cavings can generally be recognized as large, splintery rock fragments that are often concave or convex in cross-section. They are lithologically identical with formations from higher sections in the open hole. If found in large quantities, it may indicate a serious underbalanced drilling mud condition or a situation where pipe rotation is too fast and  Stabilizers are catching on the side of the hole.

If cuttings are not efficiently removed from the drilling fluid at the shale shakers, desanders, and desilters, they may be recycled through the mud system. Recycled cuttings are recognized as being small, abraded, rounded rock fragments in the sample. Microfossils, which have been recycled, can lead to serious correlation problems.

Some mud chemicals can be confused with rock types. Lignosulphonate, for example, resembles lignite, and bentonite can be erroneously identified as montmorillonite clay in a poorly mixed mud system. Moreover, lost circulation material (LCM) such as nut shells, fibers, and mica flakes, are common sources of contamination when drilling lost circulation zones.

Cement contamination is usually encountered when drilling after casing or while sidetracking well. Cement can be mistaken for siltstone, but is readily identified by testing with a phenolphthalein solution. Man-made cement stains purple due to its high pH.

Metal is occasionally found in samples and frequently originates from wearing the inside of the Casing by the Drill String. This is often remedied by using rubber Drill Pipe protectors. Other sources of metal fragments are bits, lost sidewall bullets and the products of milling operations (check also: Milling In Drilling Operations). Large amounts of metal should be reported to the tool pusher.

In some cases, samples may be totally unrepresentative of the formation being drilled. For example, in evaporite sections drilled with a Water Based Mud, salts will dissolve and there will be no lithological indication of their presence in the lagged samples. However, evaporites can still be recognized using good logging practices:

Other causes of unrepresentative samples are:

When drilling with diamond bits, the heat generated at the bottom of the hole can “burn” the cuttings to such a degree that they will have the appearance of metamorphosed rocks.