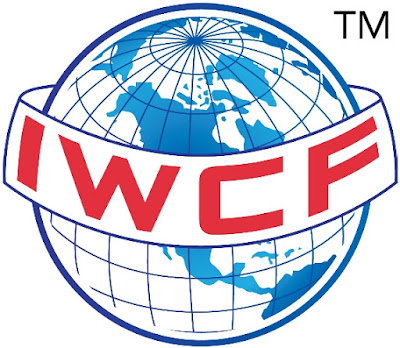 The objectives of this section are to introduce the Fundamental Principles of Well Control.

It is the name given to the process which maintains a hydrostatic pressure in the wellbore greater than the pressure of the fluids in the formation being drilled, but less than formation fracture pressure.

If the pressure of the fluids in the wellbore ( i.e. mud) fail to prevent formation fluids entering the wellbore, the well will flow. This process is stopped using a “blow out preventer” to prevent the escape of wellbore fluids from the well.

This is the initial stage of secondary well control. Containment of unwanted formation fluids.

Tertiary well control describes the third line of defence. Where the formation cannot be controlled by primary or secondary well control (hydrostatic and equipment). An underground blowout for example.
However in well control it is not always used as a qualitative term. ‘Unusual well control operations’ listed below are considered under this term:-

a) A kick is taken with the kick off bottom.
b) The drill pipe plugs off during a kill operation.
c) There is no pipe in the hole.
d) Hole in drill string.
e) Lost circulation.
f) Excessive casing pressure.
g) Plugged and stuck off bottom.
h) Gas percolation without gas expansion.

We could also include operations like stripping or snubbing in the hole, or drilling relief wells. The point to remember is "what is the well status at shut in?" This determines the method of well control.


Hydrostatic pressure is defined as the pressure due to the unit weight and vertical height of a column of fluid.

Formation pressure or pore pressure is said to be normal when it is caused solely by the hydrostatic head of the subsurface water contained in the formations and there is pore to pore pressure communication with the atmosphere.

Dividing this pressure by the true vertical depth gives an average pressure gradient of the formation fluid, normally between 0.433 psi/ft and 0.465 psi/ft.

Note: The point at which atmospheric contact is established may not necessarily be at sea-level or rig site level.

Every pressure which does not conform with the definition given for normal pressure is abnormal.


The principal causes of abnormal pressures are:-

1.5.1 Under-compaction in shales
When first deposited, shale has a high porosity. More than 50% of the total volume of uncompacted clay-mud may consist of water in which it is laid. During normal compaction, a gradual reduction in porosity accompanied by a loss of formation water occur as the thickness and weight of the overlaying sediments increase. Compaction reduces the pore space in shale, as compaction continues water is squeezed out.

1.5.2 Salt Beds
Continuous salt depositions over large areas can cause abnormal pressures. Salt is totally impermeable to fluids and behave plastically. It deforms and flows by recrystallisation. Its properties of pressure transmission are more like fluids than solids, thereby exerting pressures equal to the overburden load in all directions. The fluids in the underlying formations cannot escape as there is no
communication to the surface and thus the formations become over pressured.

1.5.3 Mineralisation
The alteration of sediments and their constituent minerals can result in variations of the total volume of the minerals present. An increase in the volume of these solids will result in an increased fluid pressure.

1.5.4 Tectonic Causes
Is a compacting force that is applied horizontally in subsurface formations. In normal pressure environments water is expelled from clays as they are being compacted with increasing overburden pressures. If however an additional horizontal compacting force squeezes the clays laterally and if fluids are not able to escape at a rate equal to the reduction in pore volume the result will be an
increase in pore pressure. 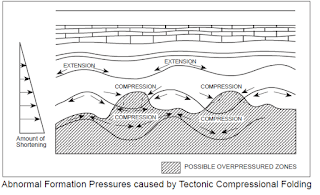 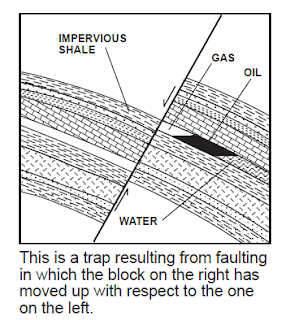 1.5.6 Diapirism
A salt diapirism is an upward intrusion of salt to form a salt dome. This upthrust disturbs the normal
layering of sediments and over pressures can occur due to the folding and faulting of the intruded
formations 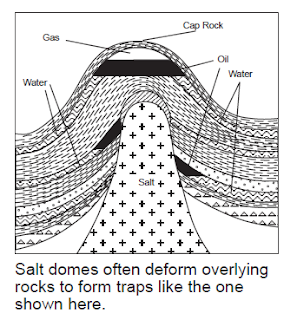 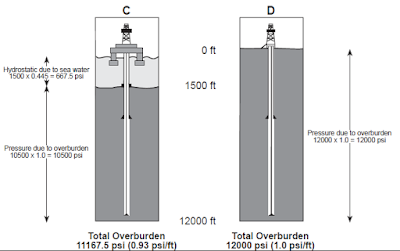 The leak-off test establishes a practical value for the input into fracture pressure predictions and indicates the limit of the amount of pressure that can be applied to the wellbore over the next section of hole drilled. It provides the basic data needed for further fracture calculations and it also tests the effectiveness of the cement job.

The test is performed by applying an incremental pressure from the surface to the closed wellbore / casing system until it can be seen that fluid is being injected into the formation. Leak-off tests should normally be taken to this leak-off pressure unless it exceeds the pressure to which the casing was tested. In some instances as when drilling development wells this might not be necessary and a formation

competency test, where the pressure is only increased to a predetermined limit, might be all that is required.

MAASP is the maximum surface pressure that can be tolerated before the formation at the shoe fractures.

MAASP is only valid if the casing is full of the original mud, if the mud weight in the casing is changed MAASP must be recalculated.

The calculated MAASP is no longer valid if influx fluids enter into the casing.

The selection of deeper casing setting depths will use different criteria to those used for shallow casing seats.

Initial selection of the setting depth is made with reference to the anticipated lithological column, formation pressure and fracture gradient profiles.

Once all the information has been collated from offset well data a plot similar to that shown in Fig 1.16 can be drawn up. By studying the geology and pressure profiles, tentative setting depths can be chosen based on the prevention of formation breakdown by mud weights in use in the subsequent hole section.

See Fig 1.17. From a Well Control point of view, it is necessary to determine whether this tentative setting depth will give adequate protection against formation breakdown when a kick is taken. A kick tolerance "factor"€ will normally be applied. 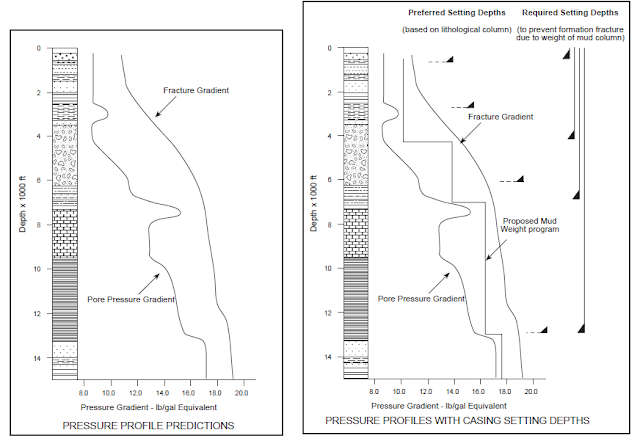 The pressure provided by the rig pump is the sum of all of the individual pressures in the circulating systems. All the pressure produced by the pump is expended in this process, overcoming friction losses between the mud and whatever it is in contact with:

Pressure losses are independent of hydrostatic and imposed pressures. 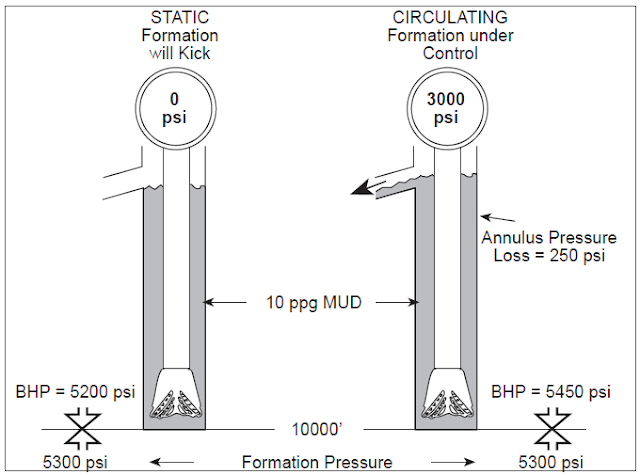