All MWD systems use basically the same directional sensors for calculating inclination, azimuth and tool face. The sensor package consists of 3 orthogonal accelerometers and 3 orthogonal magnetometers.

An accelerometer will measure the component of the earth’s gravitational field along the axis in which it is oriented. It works on the “force-balance” principle. Atest mass is suspended from a quartz hinge which restricts any movement to along one axis only. As the mass tends to move due to gravity acting along that axis, its central position is maintained by an opposing electromagnetic force.

The larger the gravitational force, the larger the pick-up current required to oppose it. The voltage drop over a resistor in the pick up circuit is measured, and this is directly related to the gravitational component. Depending on the orientation of the BHA the reading on each accelerometer will be different. From these 3 components the angle of inclination and tool face can be calculated.

A magnetometer will measure the component of the earth’s magnetic field along 1 axis. If a wire is wrapped around a soft iron core and then placed in a magnetic field, the current induced in the pick-up circuit will vary depending on the angle at which the toroid is placed. Therefore the size of current is related to the direction of the coil with respect to the direction of magnetic field. As with
the accelerometer the voltage is measured across a resistor in the pick- up circuit of the magnetometer. The voltages read at each magnetometer can then be used to calculate azimuth. 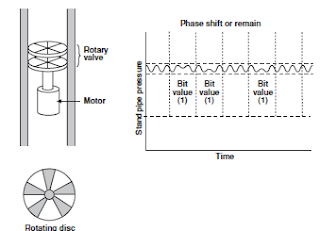 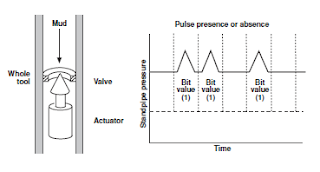 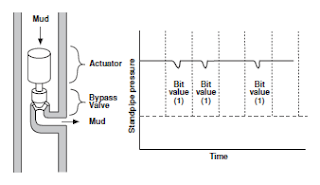 Calculations for Inclination, Toolface and Azimuth

In the following equations a, b, c, x, y, z refer to the accelerometer and magnetometer
readings with axes as shown.

Inclination (a) - the angle between C accelerometer and vertical. Looking at a
verticalion cross-section

Toolface (b) - the angle between high side and B accelerometer. Looking down the tool along the C axis:

Notice that accelerometer readings are also used in the calculation of azimuth. If there is any mistake in the accelerometer readings, therefore, inclination, toolface and azimuth will all be wrong. Since we are relying on the magnetometers responding only to the earth’s magnetic field any local magnetic effects from the drillstring must be isolated. There must be enough non-magnetic drill collars above and below the sensors to stop any such interference. As a result of this the sensors will be operating 40' - 80' behind the bit (the exact distance must be known before the tool is run).

The usual practice in taking a survey is to drill to kelly down and make the connection. Run in the hole and tag bottom. Pick up 5'-10' and keep pipe steady for 2 minutes (this allows survey data to be stored). Re-start drilling and survey data is transmitted to surface. In some tools the transmission is initiated by rotation, in others it senses pump pressure. During a steering run where a mud motor is being used an update of toolface is usually transmitted every minute. This is of great value to the directional driller as he monitors the progress of the well.