There is a wide variation in the design of these electronic packages, and they are being continually upgraded. The voltages at each sensor must be read and stored in the memory until the tool is ready to transmit.

The control system must co-ordinate the acquisition, storage and transmission of this data. Since there is no electrical on/off switch controlling the system from the surface the tool must react to some
physical change (e.g. detecting an increase in pump pressure).

Once transmission is initiated the data is sent to surface via the mud column as a series of pulses. In some systems it is the presence or absence of a pulse which carries the information, in others it is the time interval between pulses. Although these pulses travel at around 4000 ft/sec several pulses may be necessary to transmit one number. With more sensors and more data to transmit the control system becomes a critical factor (e.g. valuable GR signals may be lost while the tool is sending directional data).

There is also the problem of collecting vast amounts of data, but not being able to transmit quickly enough. Transmission speeds of up to 0.8 bits per second are available. Survey data words typically consist of 10 bits, and formation data words consist of 11 bits. 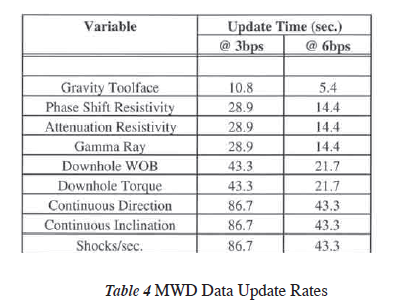