7 THINGS YOU NEED TO KNOW ABOUT AERATED & FOAM DRILLING MUD

Air drilling uses air volume to drill formations that present major problems for drilling fluids. Foam is a combination of water or polymers/bentonite slurry mixed with a foaming agent;  air from a compressor combines with the foaming agent to form the bubbles that act as carrying agents for cuttings removal. Aerated mud can be virtually any Water Based Mud to which  air is added. This type of mud has less hydrostatic pressure and less tendency to fracture weak formations. Foam and aerated muds are useful in situations where air drilling is not possible and drilling fluids are not efficient.

In situations where normal drilling fluids are not appropriate, air, foam, and aerated muds are effective alternatives. These fluids can be used when drilling the following formations:

Table.1 explains how each fluid is used.

Air drilling uses compressed gas for hole cleaning. Air is the most commonly used gas, but natural gas and other gases can also be used.
Problems that can be encountered with gas drilling include:
As the stream of gas and cuttings erodes the wall and widens the annulus, a greater increase in gas volume is required to maintain gas velocity. Sometimes water or mud is misted into the well to inhibit shales and reduce Torque And Drag.
The most important aspect of gas drilling is Mud Hydraulics in other words to maintain an adequate annular velocity. If the annular velocity falls below the point where it can clean the hole, the cuttings will accumulate and cause Stuck Pipe. An annular velocity of 3,000 ft/min is normally required for air drilling.

Foam drilling Mud uses foam as the carrying agent for cuttings removal instead of air velocity. Foam drilling requires less volume than air drilling and relies on bubble strength to remove cuttings, while air and mist drilling depend on extremely high flow rates. An indication of effective foam drilling is a continued and regular flow of foam at the blooey line.
A pulsating, irregular flow (heading) can indicate problems with the flow columns. In addition to hole cleaning, the foam deposits a thin filter cake on the walls of the hole to improve borehole stability. To thicken foam and improve hole cleaning and water tolerance, polymers and/or bentonite are used to mix a slurry for injection.

Foam drilling Mud is most effective when the lowest possible StandPipe Pressure is maintained. Pressure on the standpipe can range from 80 to 350 psi. Changes in the standpipe pressure are the best means of detecting any drilling problems. As pressure changes are identified, adjust the foam injection rate and the gas volume percentage to deal with the change. Table.2 provides corrective adjustments for different types of pressure changes.

Use these guidelines to manage the foam-drilling Mud system.

Condition of foam at the blooey line

Under normal drilling conditions, foam at the blooey line should be similar in appearance and texture to shaving-cream foam. If the foam is not thick or does not hold its shape, adjust the rates of gas and foam-solution injection. Consult Table 3 for appropriate steps.

Use these adjustments to correct foam based drilling mud on observation at the blooey line.

Heading or regularity of foam return at the blooey line

For optimal removal of cuttings, foam returns at the blooey line should be continuous. Heading and unloading can indicate problems with the foam column.

Aerated mud systems reduce lost circulation in areas with very low fracture gradients. At the same time, shale hydration and corrosion are minimized. Effective mud weights of 4 to 6 pounds per gallon (0.48-0.72 sg) are possible with an aerated system. These weights substantially reduce differential pressure in the wellbore. Because of the lower pressure, the driller (Check also Driller Job Descriptions) can reach a higher penetration rate than is possible with normal drilling fluids.

The following equipment is needed for an aerated drilling mud system:

Drilling equipment for aerated muds is basically the same as with Oil Based Mud and Water Based Mud with the exception of compressors and rotating heads. The compressors are analogous to mud pumps. The rotating head diverts the high-velocity air in the annulus through the blow down line Fig.1 & Fig.2

Note: When comparing compressor ratings, remember that ratings are made at sea level. Adjust the ratings as necessary to allow for the altitude at the drilling site.

Note: The rotating head should be maintained to prevent mud loss at the head which may cause at the end a well control problems. If the drilling crew is not paying close attention, an undetected loss at the head can be mistaken for lost circulation in the hole.

Note: The separator is typically a cylindrical tank 3 to 6 feet in diameter and 8 to 10 feet high with baffles to help break the air out of the mud.

Note: This vent also accommodates overflow when the return is hard

To find Bottom Hole Pressure (BHP) loss due to gas-cut mud:
Moderate gas cutting reduces measured mud weights on the surface, but, due to gas behavior under pressure, produces little effect on the effective hydrostatic head at depth.
When minimum overbalances are being used, or gas cutting becomes severe, an accurate method of determining the BHP reduction is needed. (See note below.) This graphical solution disregards the effect of gas density and thus provides a tool useful for either gas or air. As such, it becomes useful for determining air injection volumes required for a desired reduction of hydrostatic pressure. 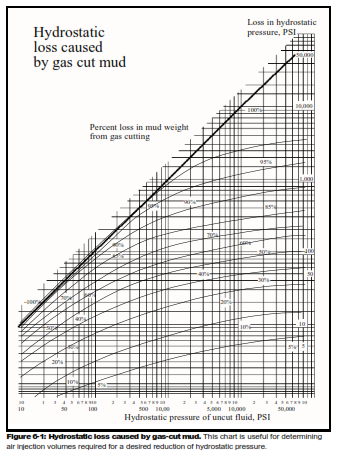 Aerated and Foam Drilling Mud fluids can be corrosive. The injected air contains carbon dioxide and oxygen that promote corrosion. Inhibitors are needed to counter the effect of these gases. The products in the following table are recommended for corrosion problems.

Problems associated with air or natural gas drilling are often due to insufficient air volumes for removal of the cuttings. Annular velocity below 2,500 ft/min may not remove the chips. In addition, these high velocities commonly erode and enlarge the wellbore such that a volume previously satisfactory before the erosion will not lift cuttings after the erosion. Surface flow restrictions should be minimized because of the ease at which air or natural gas can be compressed, thereby reducing its flow rate. The approximate required circulation rate for air drilling can be calculated with Eq.1. The equation is based on a minimum annular velocity of 3,000 ft/min to lift the water with air.

Mist or foam drilling mud is an alternate procedure for lifting cuttings from the hole while reducing the annulus hydrostatic pressures. These fluids with higher viscosities than air or gas do not require the high flow rates. As an example, a stable foam may require only 200-300 ft/min to clean the annulus. Common mud additives for air systems are detergents for foaming, corrosion inhibitors, lubricants for friction reduction, and viscosifiers such as CMC.

Aerated muds are used when greater lifting capacity is required and when a reduced hydrostatic pressure is desired. Air is injected into the mud at the standpipe, circulated down the drill string, and channeled up the annulus where it expands and reduces the hydrostatic pressure. The required air volume can be computed with Eq.1 & 2:

The ratio n/(100 – n) is the value of cubic feet of air per cubic foot of mud at surface flowline pressure:

Field experience has shown that the results from Eq.2 may be 15-20% above the required volumes for dry drilling and possibly 15-20% below the necessary amount for mist drilling.

Typical connection while drilling with air (mist) in the Barnett Shale on H&P rig 263. The operator liked breaking out with a little air still in the string so that it didn’t take so long building air after the connection.  You can get stuck pretty quick when drilling with air.

This paper will describe in length the performance of the trial jobs, present the lessons learned from the implementation of this innovative drilling fluid technique and highlight the best practices utilized to make it a cost-effective solution.

Aerated mud is defined as a fluid consisting of liquid (usually water), air, and drill cuttings. It can be shown that the theories on gas/solid two-phase flow developed for air and mist drilling and theories on liquid/gas two-phase flow developed for oil production through tubing are inaccurate when applied to aerated mud flow in an annular wellbore. Therefore, a mathematical model for describing three-phase (air, water, and cuttings) flow in a wellbore has been proposed by Guo et al. The modeling was validated by a comparison with field data obtained from aerated mud drilling. This paper uses the developed model to determine the liquid and air volume requirements considering cuttings-carrying capacity of the aerated mud, wellbore stability, pressure-differential pipe sticking, and formation damage.