CAUSES OF KICKS AND INFLUXES

The most common causes of kicks are:

Surveys in the past have shown that the major portion of well control problems have occurred during trips. The potential exists for the reduction of bottom hole pressure due to:

1) FAILURE TO KEEP THE HOLE FULL DURING A TRIP

If the fluid level in the hole falls as pipe is removed a reduction in bottom hole pressure will occur. If the magnitude of the reduction exceeds the trip margin or safety overbalance factor a kick may occur. The hole must be kept full with a lined up trip tank that can be monitored to ensure that the hole is taking the correct amount of mud. If the hole fails to take the correct mud volume, it can be detected. A trip tank line up is shown below. 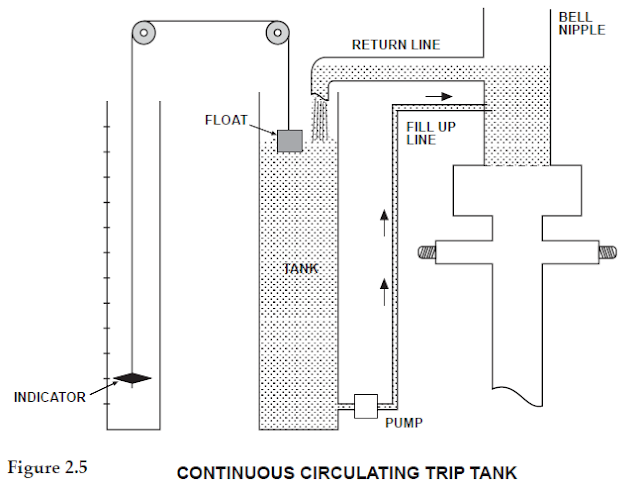 It is of the utmost importance that drill crews properly monitor displacement and fill up volumes when tripping.  The lack of this basic practice results in a large amount of well control incidents every year.

Swabbing is when bottom hole pressure is reduced below formation pressure due to the effects of pulling the drill string, which allows an influx of formation fluids into the wellbore.

Surging is when the bottom hole pressure is increased due to the effects of running the drill string too fast in the hole. Down hole mud losses may occur if care is not taken and fracture pressure is exceeded while RIH. Proper monitoring of the displacement volume with the trip tank is required at all times. 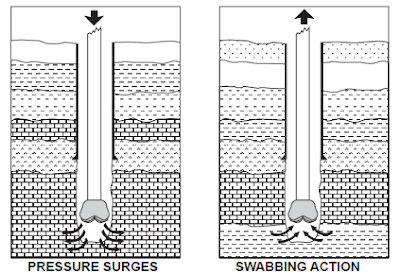 The factors affecting swabbing and surging are:

A small influx volume may be swabbed into the open hole section. The net decrease in hydrostatics due to this low density fluid will also be small. If the influx fluid is gas it can of course migrate and expand.

The expansion may occur when there is little or no pipe left in the hole. The consequences of running pipe into the hole and into swabbed gas must also be considered.

Trip Margin:
A safety factor to provide an overbalance to compensate for swab pressure can be:

If swabbing has been detected:

First Case - The well is not flowing then the following should be carried out:

1- A non return valve should be installed
2- The bit returned to bottom.
3- Flow check each stand.
4- Once back on bottom the well should be circulated and the bottoms up sample checked for contamination.

Second Case - If the well is flowing or the returns from the well are excessive when tripping in then the following should be carried out:

1- Install a non return valve. If there is a strong flow then a kelly cock may have to be installed first.
2- Shut the well in.
3- Prepare for stripping.
4- Strip in to bottom.
5- Circulate the well, check bottoms up for contamination.

Continuous monitoring of replacement and displacement volumes is essential when performing tripping.

A short wiper trip and circulating the well before pulling completely out of the hole will provide useful information about swabbing and pulling speeds.

Useful formulas for calculating the psi reduction per foot of drill pipe pulled are as follows:

Another cause for a kick to occur is the reduction of hydrostatic pressure through loss of drilling fluid to the formation during lost circulation. When this happens, the height of the mud column is shortened, thus decreasing the pressure on the bottom and at all other depths in the hole.

The amount the mud column can be shortened before taking a kick from a permeable zone can be calculated by dividing the mud gradient into the overbalance at the top of the permeable kick zone.

A kick can occur if a permeable formation is drilled which has a higher pressure than that exerted by the mud column. If the overpressurised formations have low permeability then traces of the formation fluid should be detected in the returns after circulating bottoms up. If the overpressured formations have a high permeability then the risk is greater and the well should be shut-in as soon as flow
is detected.

A further cause of kicks from drilling accidentally into abnormally pressured permeable zones. This is because we had ignored the warning signals that occur, these help us detect abnormal pressures.

Some of these warning signals are:


Abnormal Pressure Causes
In some areas, there were adequate sands that were continuous and open into the sea or to the surface. In these areas the water squeezed from the shale formations, traveled through the permeable sands and was released to the sea or to a surface outcrop. This de-watering allowed the formations to continue to compact and thereby increase their density. 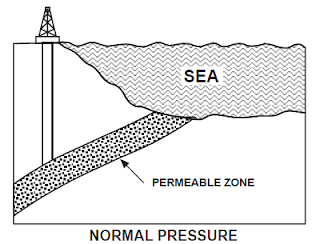 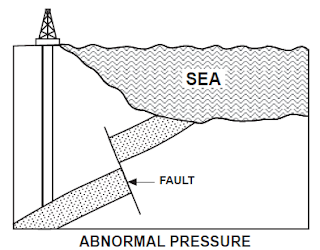 In other areas, or at other times, the sands did not develop or were sealed by deposition of salt or other impervious formations, or by faulting such as we have indicated here. Although the shale water was squeezed, it could not escape. Since water is nearly incompressible, the shales could not compress past the point where the water in the shale started to bear the weight of the rock above.

This section caused a condition in which the weight of the formation - that is, the overburden -
was borne not by the shale alone, but assisted by the fluids in the shale. In this situation the shale will have more porosity, and a lower density, than they would have had if the now pressured water had been allowed to escape. These formations, both sand and shale, are then overpressured. If a hole is drilled into an overpressured formation, weighted mud will be required to hold back the
fluids contained in the pore space.

The causes of abnormally high formation pressures are related to a combination of geological, physical, geochemical and mechanical processes

Abnormally high pressure gradients will thus be between the normal hydrostatic gradient (0.433 to 0.465 psi/ft) and the overburden gradient (generally 1.0 psi/ft).

Kicks from shallow sands (gas and water) whilst drilling in the top hole section with short casing strings can be very hazardous, as documented by many case histories.

Some of the kicks from shallow sands are caused by charged formations.

The formation test is one of the most hazardous operations encountered in drilling and completing oil and gas wells. The potential for stuck tools, blowouts, lost circulations, etc., is greatly increased.

A drill stem test is performed by setting a packer above the formation to be tested, and allowing the formation to flow. Down hole chokes can be incorporated in the test string to limit surface pressures and flow rates to the capabilities of the surface equipment to handle or dispose of the produced fluid.

During the course of the test, the bore hole or casing below the packer, and at least a portion of the drill pipe or tubing, is filled with formation fluid. At the conclusion of the test, this fluid must be removed by proper well control techniques to return the well to a safe condition. Failure to follow the correct procedures to kill the well could lead to a blowout.

b) Drilling Into an Adjacent Well

If this occurs at a shallow depth, it is an extremely dangerous situation and could easily result in an uncontrolled blowout.

When drilling a gas bearing formation, the mud weight will be gas cut due to the gas breaking out of the pore space of the cuttings near the surface. The severity of the influx will depend on the penetration rate, porosity and permeability, and is independent of mud weight.

The importance attached to gas cutting is that gas is entering the wellbore in small quantities, which calls for caution. Degassing is necessary to ensure that good mud is being pumped back into the hole to prevent the percentage of gas from increasing with each circulation, which would allow greater and greater bottom hole hydrostatic pressure reductions.

Most of mud cutting is close to surface. Divert flow through choke manifold to prevent belching and to safely contain gas through mud gas separator. Time drill the gas cap to prevent severe gas cutting of mud.

Gas cutting alone does not indicate the well is kicking, unless it is associated with pit gain. Allowing the well to belch over the nipple could cause reduction in hydrostatic pressure to the point that the formation would start flowing, resulting in a kick.